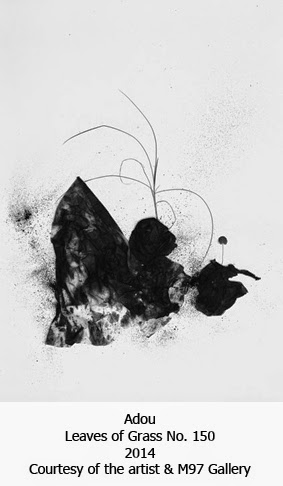 “There is no difference between taking a picture


of others and myself. The camera may be pointed outward,
but whether you like it or not, it always reveals you.”
Adou

There is a certain appropriateness in Chinese photographer Adou using a monochromatic approach to his work as he explores the dualities of life and death, past and present along with his place in the scheme of things. The black and white of these self reflective meditations preclude alternative depictions.

From the semi abstract documentary series Samalada to his purely abstract series Leaves of Grass, Adou explores his cultural identity in an inherently philosophical discussion of opposites.

In the 2006/2007 Samalada series Adou documents the Yi people, an ethnic minority from his native province of Sichuan, and the clash between their traditional culture and the demands of a modern China. Using expired film Adou’s images have the mottled, dappled appearance of the earliest analogue photographic processes.

In his latest series of works, Leaves of Grass, Adou shifts his focus to the abstractions we walk upon daily. Channeling the influence of Chinese traditional ink painting and calligraphy Adou documents the unremarkable aspects of the natural world. As he wrote in an essay about the series “When one day you no longer find yourself carrying high ideals, and raise your head but cannot see the sky, you will begin to pay attention to the unimpressive world beneath your feet……”

And, then there is Adou’s self titled series of conceptual self portraits. Alone and naked, the small but undiminished Adou is exposed in the expansive deserts of Inner Mongolia. In his essay for this series Adou wrote “We are helpless as humans, as Chinese. Chinese people carry a heavy burden. Pressure is ubiquitous and overwhelming. Even if you indulge yourself in deviation for a little while, you are doomed to face the music! You face the country; face the authority; and face the truth that you would rather not see.”

As M97 Gallery's director Steven Harris, wrote in his eassay ‘Two Sides of the Same Page' “The poignancy of these works lies in the poetic intuitive mind of the photographer that captures and aligns the elements perfectly combined in his camera to question and contemplate for the viewer without any overt statement or criticism in his artistic language. It is this very subtly and fragility in Adou's work that intrigues us and gives the photographs their power.”

Adou’s current exhibition Leaves of Grass in on show at Shanghai’s M97 Gallery until the 15th of March. 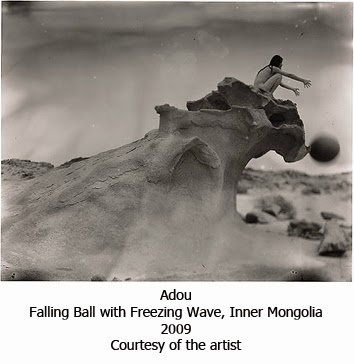