Here’s a Little Shot I Took 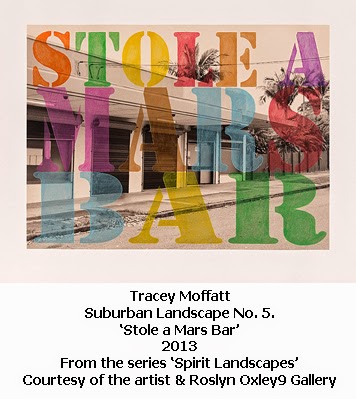 “I like the survival stories. And that’s what it’s like being an artist, it’s surviving and it’s your next body of work. You’re all alone and nobody’s coming to save you.”
Tracy Moffett

In a 1998 interview with Bomb Magazine’s Coco Fusco the Australian artist Tracy Moffett said “Literature often influences my work. I’m thinking of Southern American writers like Tennessee Williams, Truman Capote, Carson McCullers in particular. Her stories remind me of where I come from. Queensland and the northern part of Australia is a very beautiful place, but also very redneck; a kind of paradise to grow up in, but you can’t wait to get the hell out.” And get out Moffett did.

The half Aboriginal Moffett grew up in a white foster family home in the working class suburb of Mt Gravatt East in the Queensland capital city of Brisbane. At the age of 18 Moffett took off to go backpacking round Europe for nine months. Upon her return she enrolled at the Queensland College of Art. Moffett’s next escape, the year following her graduation, was to Sydney where she started to consolidate her reputation as an artist. Fifteen years later Moffett moved out of her comfort zone, relocating to New York. As she told The Saturday Paper’s Rebecca Harkins-Cross “You’re 37 years old and you go back and live like an art student again.”

It was a move that paid off. With exhibitions in the Aperto section of the Venice Biennale and at New York’s Dia Foundation in the same year, Moffett’s star became a permanent fixture in the international firmament.

Moffett describes herself as a “director of photo-narratives” which sees take on the roles of performer, film maker and photographer, sometimes she even wears all three hats simultaneously. Although the photographic influence dominates, as she told Catherine Summerhayes for her book The Moving Images of Tracy Moffett “I am constantly thinking composition in a photographic sense, and framing and photographic textures are very important in my movies.”

“I’m a socialist who for lives for designer clothes” Moffett says of herself. An attitude reflected in her work as she mixes the political with the personal to make enigmatic staged documentary narratives about which she is exceeding coy. “The reading’s got to come from the viewer. The minute I say what the narrative is, I really believe it’s the end of an art work. I never say what it is,” she states.

Moffett’s latest exhibition Kaleidoscope is the Perth Institute of Contemporary Arts’ Festival of Perth contribution. The video Art Calls is on show along with photographs from the Spirit Landscapes series until the 15th of April. 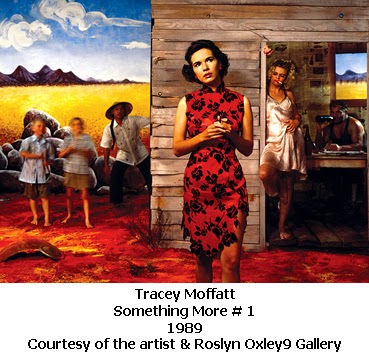