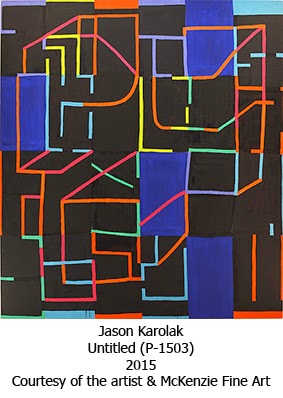 “Geometry is the starting point, but I try to let all of these other things bleed into it.”

The internet came into being in the 1960’s during the height of the Cold War as a communication network that could survive a nuclear attack. Over time as the broader community adopted the personal computer it morphed into what we call today the World Wide Web with a great many people interested and involved in its ongoing design. It evolved from the quintessential horse into the camel we have today; inherently practical but not particularly elegant.

So it is with the abstract geometric paintings of Michigan born artist Jason Karolak. Working concurrently on both large (measured in feet) and small (measured in inches) paintings Karolak explores complex linear structures and irregular geometrics often painted in vivid and sometimes florescent colors. As he told Studio Critical “The small paintings get built up over time. These are thick, dense, and have shallow spaces. There is a packing in of information and energy. The large paintings move in a very different way. In these I get more into the physical and gestural activity of making a painting, into my body. These become more tweaked and open, and hopefully more lightweight. The energy is moving outward instead of in. In both sizes I am left with a form or thing, a sort of projection, something internal made visible.”

Where the Dutch painter Piet Mondrian’s geometric inspired works of formal grids with judiciously placed blocks of color reflect an elegant aesthetic, Karolak’s works reflect a more seemingly haphazard approach. As the New York Time’s Roberta Smith said in her 2008 review of his work “Jason Karolak is showing canvases in which shaky geometric images creep across the color spectrum one mosaic like stroke at a time.”

Karolak’s mappings talk to these structures that support the increasing visual communication of the 21st Century. Through our Facebook, Twitter and other social media accounts we add to World Wide Web’s growth in a disorganized outpouring of personal concerns which whilst cathartic is hardly ever elegant en mass.

A self titled exhibition of Karolak’s recent works will be on show at New York’s McKenzie Fine Art from the 13th of February to the 22nd of March. 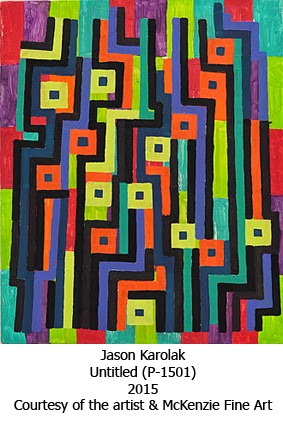