A Triumph Over Adversity 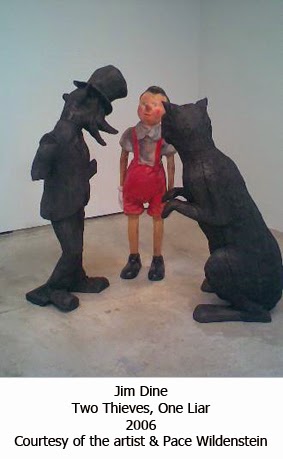 “I don’t have any rational thoughts.”
Jim Dine

American artist Jim Dine was in his mid 20’s when he acquired his own Pinocchio doll. As he told artnet’s Ilka Skobie “I saw the Walt Disney movie when I was six, and I was very frightened by it, enchanted by it. And I identify with it. I was a liar, little boys are liars. And then in the ‘60s I found a Pinocchio doll in a junk store, and I bought it, it was a beautiful thing, it was papier-mâché with real clothes sewn by hand, probably made in Japan.”

It took Dine another 30 years to figure out how to incorporate the puppet who became a boy into his work. But once discovered he has painted, sculpted, made pints about and written poems for Carlo Collodi’s fictional children’s hero. Pinocchio joined his tools, hearts and Venus di Milo; another theme of fascination for the dyslexic artist.

Not being able to read Dine was the quintessential disruptive student. As he has said “the only thing I could read was poetry till I was 22 and I started to read novels. But you know, poetry kept me in the world of language…I went to art school because it was better than going to regular school.”

Loosely identified within the pop art movement for his depiction of everyday objects, Dine’s incorporation of abstract expressionist and surrealist sensibilities in his work pushes that categorization.

Dine’s Venus Di Milo series is more about his need to connect with the past than the depiction of plaster cast kitsch object. As he said in an exhibition catalogue ““So that when I went to the art supply store…and got a Venus de Milo figure, it was not with the idea of celebrating kitsch. I was not responding to it as an object of Pop Art, or popular culture. I saw it as a timeless classical figure which held the memory of its magnificence even in its reduced size…I was painting still lifes in the late 1970s, and I would include it, the plaster cast. But then I knocked the head off of it and made it mine.”

Likewise, his heart series which Dine uses as a landscape to explore emotions in general and Pinocchio’s heart in particular as it fuels the puppet’s determination to triumph over adversity. As Dine said at the age of 75 “it is a great story because it’s a metaphor for art, this old man brings the puppet to consciousness through his craft, and in the end I am Geppetto, I am no longer Pinocchio.”

The exhibition Jim Dine: Tools is currently on show at New York’s Senior & Shopmaker Gallery until the 28th of March. 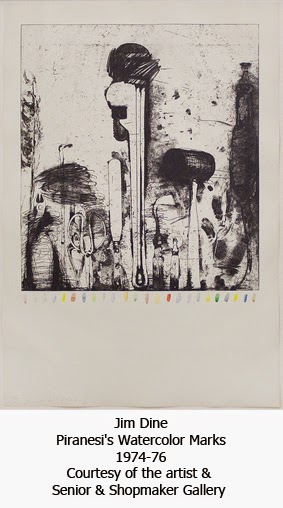