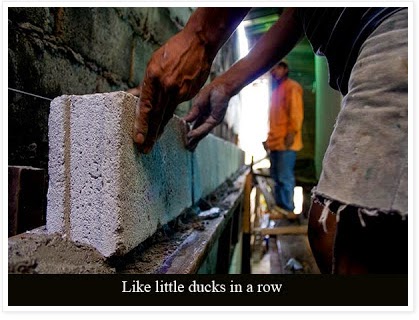 Yesterday was Australia Day – a time when expat Aussies stop and consider koalas, kangaroos and other marsupials with “made in china” stamped on their bum as cuddly toy reminders of "home". Invariable they also draw comparisons with their new life in their new country.

Having had my house seriously renovated, the upstairs demolished and re-built, the differences in work practices are foremost in my mind. In the dry brown land labor is expensive and in comparison materials are cheap, the opposite to here in the Philippines.

In Australia power tools, from circular saws to nail guns are all the go, whilst in the Philippines the hand saw and the hammer rule. In Oz a brickies team is expected to lay a thousand bricks a day to be considered for the job whilst here in the Pearl 300 a day is a good average. And when one considers the Philippine brickie has to stop from time to time to build from scratch the scaffolding to get up to the job it isn't that bad an average.

In my case a 6 meter long by 5 meter high brick wall had the scaffolding built twice using recycled timber from other parts of the job. In Oz the steel scaffolding arrives on the back of a truck, enough for the entire job which when finished is taken to its next job. Although some timber is recycled in Australia it is only the best bits and is usually done off site unlike in the Phils where it is refurbished and used in the job at hand.

The quality of the workmanship is on a par between countries and the builders in both countries share the common traits of cutting whatever corners they think they can get away with and most frustratingly of all just not turning up on some days. In the PR there seems to be more of these days that one has to live with the noise, the dirt, the dust and the inconvenience, but then the price tag at the end of the day is considerably easier on the hip pocket nerve.

It strikes me, after some consideration, that it isn't cuddly toys that define the difference between cultures but patience. In Australia it is considered a virtue, whilst here in the Philippines it is a necessity.
Posted by Henry Bateman No comments:

A new guest gallery has been added at www.pissedpoetpics.com. A series of photographs by budding photojournalist Darren Stones that is a virtual tour of Tasmania's historic penal settlement Port Arthur. 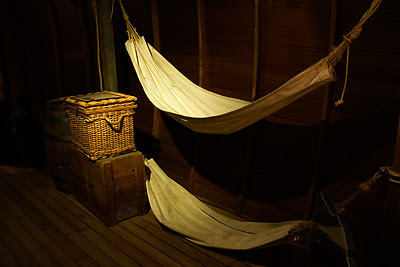 In this series of photographs Stones not only captures what this premier tourist attract looks like today but imbues it with a sense of what it must have been like for its original inhabitants. To see this gallery click on the www.pissedpoetpics.com link and then follow the links to this guest gallery.

Please note www.pissedpoet.com died some time ago.
Posted by Henry Bateman No comments:

Looking for a Nail 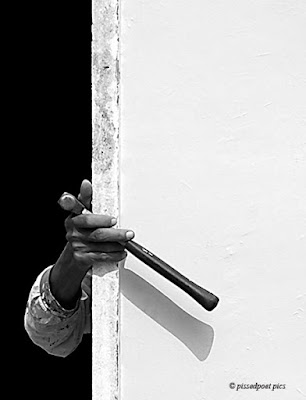 As I look back on 2006 this image seems to be sublimely appropriate. From the personal perspective of home renovations, "will these bastards ever leave?", to the broader world context which includes Iraq and Palestine "will these bastards ever leave?". For me 2006 was the year of the nail and when you go out with that perspective the hammer rules just a shame that a screw looks a lot like a nail. I guess we need to take our world leaders back to grade school and teach them the difference. I mean with a nail outlook you rape, with a screw it is more like making love. And the beauty of making love is that it takes two, double your pleasure. If you accept this premises then George, John and Tony are just a bunch of wankers. Oh well, I guess that makes for a happy hammer.
Posted by Henry Bateman No comments: