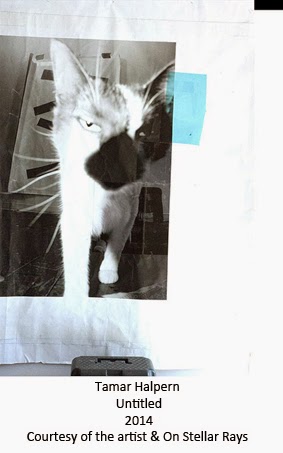 “The works aren't trying to be paintings or photographs,
but rather just a combination of things I look at and what I like.”
Tamar Halpern

For the New York based mixed media artist Tamar Halpern the free association of ideas motivates her art, both in the way she makes it and the response she wants from her audience. As she told the Interview’s Noor Brara a few days before the opening of her latest exhibition “It's a very malleable process and it goes back and forth. I'm responding to what I'm seeing. There's no fixed initial idea or purpose.”

Coming from a photographic background Halpern was frustrated by the mediums limitations. “I used to work for a traditional photographer and I would spend hours in the darkroom building multiple developers, testing paper and things like that, but I don't really fit in with that kind of photography. So I started creating compositions using photographs on the computer,” she said.

As Halpern’s enquires developed so too did her methods expand, from digitally manipulating content Halpern added diverse printing techniques, collage and painting. As she says “I wanted to find my own way. My way of working straddles both photography and painting, and because painting is both an additive and subtractive process, I take it step by step. It's a collage of layers between mediums, yet the images are photographic as (a) whole.”

Explaining further Halpern says “The process is usually the same for each work: I'll print a layer, then make a collage over it, then take a photo of it and load the photo on the computer. I can delete part of the image and then layer only a certain portion over the print.”

The results are difficult to categorize and have been variously described as “impossible monoprints” (Artforum),  “unruly and unhinged” (Time Out) and “enigmatic and cinematographic” (LanciaTrendVisions.com). As the press release for her 2013 exhibition Six Minutes of Pleasure stated “Tamar Halpern’s works simultaneously explore, amplify, and disrupt the legacies of modernist abstraction.”

Or as Halpern would put it “It’s like the image of the cat in one of my works—it's representational, but it's still abstract. There are traces of meaning and then not. That's art, right?”

Halpern’s current exhibition My Voice at the Pace of Drifting Clouds is on show at New York’s On Stellar Rays  until the 29th of March. 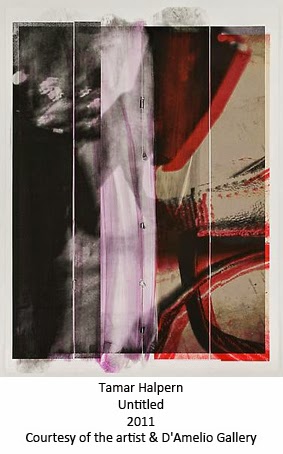