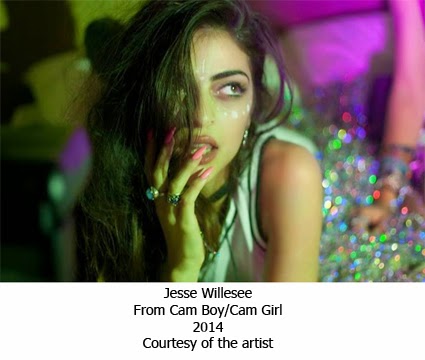 “I take headlines and turn them into art, that art then turns back into headlines.
It’s taking a tabloid journalism style approach to art.
It’s taking all my art shows online and out of galleries, which have always kind of bored me.”
Jesse Willesee

The Australian Government created more outraged headlines than usual when they announced in their 2014 budget in which Australians would have to pay more to visit their doctor and under 30’s unemployment welfare would be cut. The Australian Prime Minister, Tony Abbott, created a flurry of more headlines with his “wink that sparked a thousand tweets” on talk back radio. Abbott was filmed winking to the programs host as he took a call from a 67 year old phone sex worker with medical problems.

It was manna from heaven for the Australian conceptual artist Jesse Willesee confirming his resolve to push through with his Cam Girl/Cam Boy flash/mob event. An installation of five hotel rooms with models and actors simulating live sex cam workers in each that were streamed to an in-house computer. The audience was free to consume the event how they wished. As Willesee told the Wentworth Courier “You can walk from room to room and photograph, look at or watch or however you want to consume the art is up to you.”

Willesee contends that sex cam work could be an attractive option for unemployed people under 30. “What’s going to be the fastest, easiest job for a 19 or 20 year old girl or boy to get if they lose their job and can’t get the dole? They can hop on a live cam website and start making money the same day. Even to get a job stacking shelves at Woolies you need to go through an interview process,” he said.

Controversial is the most common adjective attached to the name of this artist who grew up in a media savvy and socially aware family. Both his father and his uncle were very well known local journalists and TV presenters who were not immune to controversy.

Willesee’s latest venture Andy Warhol with Better Features was a reworking of the earlier project Product Placement but with a dig at galleries.

Product Placement was a photographic flash/mob event, a record of which can be seen on his Tumbler page. As he told AUreview “I noticed a trend for people to pose with products in their pictures. And I thought that was interesting. In the past that was product placement - where a company gets you to use your image to help promote themselves. Now it’s kind of happening in reverse. I feel like a lot of people want that iconic imagery that these companies have created.”

Whilst Andy Warhol with Better Features was Willesee’s response to Sydney’s Museum of Contemporary Art’s banning of the selfie stick. In collaboration with Valentina Penkova he was photographed as he took selfies in front some of the museums artworks using a selfie stick. During the event as Willesee told Art Daily “People were taking photos of Valentina taking photos of me while I was taking photos of myself. No one was looking at the art. Other people’s art is just a prop in your own self made art.

Examples of Willesee’s work can be seen on his website, here. 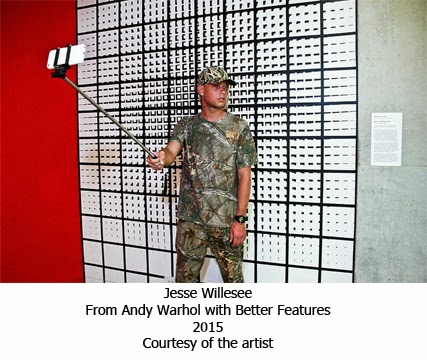