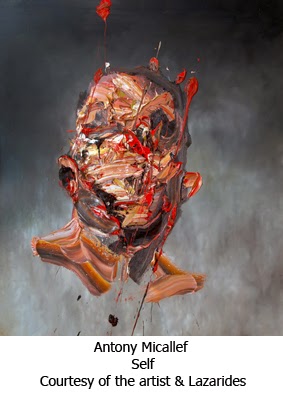 “That’s one of the benefits of being an artist.
I can be incredibly self-indulgent and just say, it’s my job!”

Apart from being an affluent suburb of London, Notting Hill is the title of the Julia Roberts, Hugh Grant romantic comedy about which film critic Robin Clifford wrote “Hollywood has reached a new level of movie star indulgence.” Notting Hill is also where British artist Antony Micallef calls home.

The balcony of his flat, just off the Portobello Road, is his favored place to give interviews to journalists after their Cook’s tour of his exceeding messy studio. It is almost a parody of his works about the vacuous nature of our modern consumer lifestyle that consolidated Micaffef’s fame after gaining second prize in the 2000 BP Portrait Award.

But as he told the Telegraph newspaper’s Andrew Perry in the lead up to his 2011 exhibition Happy Deep Inside My Heart “I’m sucked in by it just like everyone else. I’m guilty of all the things I paint about. I’m part of the problem. This show is about me realizing that I’ve become the sludge, the slush. I have to be honest in my painting.”

As his journey as an artist continues Micallef’s search for honesty has seen his style change from the graphic illustrative aspect of his earlier works to the painterly involvement of the contemporary expressionist. As he says “I want to say it all with the actual medium this time without illustrating it. I wanted the luscious density of the paint itself to describe the feeling without narrating it.”

The freedom that having ‘A’ list collects such as Brad Pitt and Angelina Jolie enables Micallef to concentrate on his work without the need for a day job. A necessity considering a painting may take up to 10 hours of sustained effort in one session. As he told Notting Hill & Holland Park Magazine’s Hannah Lemon “I hate using the word trance, it’s such a cliché but you are definitely in a state where you don’t feel the cold; you’re playing an album and you don’t hear the music. You are just really engaged.”

This doesn't mean Micallef has given up on his indulgences. He recently purchased a 1910 chandelier that once graced the stately halls of a Lake Como villa for his flat; a treat for himself after his last show. As he explained to the Telegraph’s lifestyle section’s My Space “In my work, I like mixing in classical things with contemporary imagery, and I do it at home too. Contrast is what makes things interesting.”

Micallef’s exhibition Self, a series of self portraits, is currently on show at London’s Lazarides Rathbone until the 19th of March. 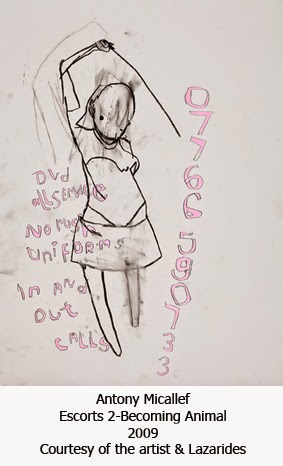