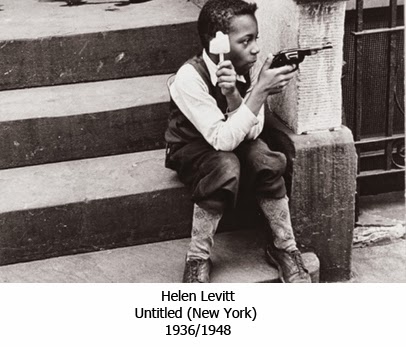 "If it were easy to talk about, I'd be a writer,
Since I'm inarticulate, I express myself with images."
Helen Levitt

To be a good street photographer it is essential to have an intuitive sense of composition. For the speed necessitated by taking photographs in the street the picture’s composition must be a reflex.  Henri Cartier-Bresson, the 20th Century’s most famous street photographer, learned the "the careful construction of a visual space" studying painting as a youth. For the American street photographer Helen Levitt it was learned by frequenting New York’s many museums and galleries.

An indifferent student, Levitt dropped out of high school to work for the commercial portrait photographer and family friend J. Florian Mitchell. Whilst in his employ she taught herself photography. As she has said “I decided I should take pictures of working class people and contribute to the movements. Whatever movements there were Socialism, Communism, whatever was happening. And then I saw pictures of Cartier-Bresson, and realized that photography could be an art and that made me ambitious.”

During the 1930’s and 40’s Levitt produced an impressive body of work from the streets of the poorer parts of town with children being of special interest. “It was a very good neighborhood for taking pictures in those days, because that was before television. There was a lot happening. And then the older people would sometimes be sitting out on the stoops because of the heat. They didn't have air conditioning in those days. It was, don't forget, in the late '30s. So those neighborhoods were very active,” she recalled in 2002 interview with National Public Radio.

In the 1950’s Levitt turned her hand to documentary film making but in the 1960’s she returned to still photography. With the aid of Guggenheim Foundation grants in 1959 and 1960 Levitt transitioned from black and white to color, but returned to black and white in the 1990’s because the specialist laboratories printing her work weren’t always able to produce the colors she wanted.

Even with several books of her work having been published along with multiple museum and gallery exhibitions to her credit Levitt never found great public acceptance. As the Metropolitan Museum of Art’s curator of photography, Maria Morris Hambourg said in 1998 “Even now, fifty years after the first of her three exhibitions at The Museum of Modern Art in New York; Levitt remains what is known as a "photographer's photographer."

An exhibition of her work Helen Levitt: In the Street is currently on show at Atlanta’s High Museum of Art until the 21st of June. 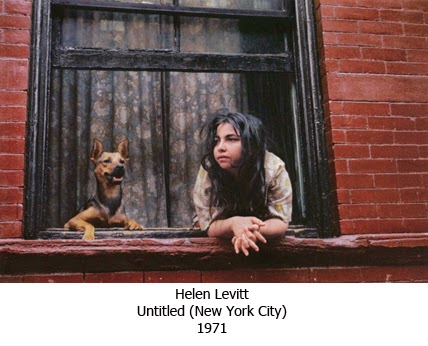