The Colors of Life in South West Texas 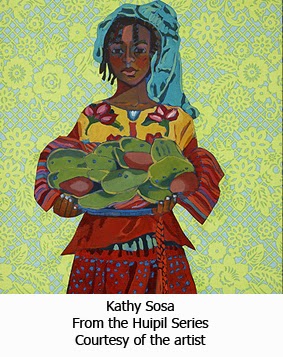 “The people in these paintings are colorful in every sense of the word and I aim to create a setting for each that reinforces and communicates their mood and personality.”
Kathy Sosa

Kathy Sosa was in her mid forties when she first tried her hand at painting. Married to a locally respected portrait painter in the San Antonio area of south west Texas, Sosa would play the dutiful hostess for her husband’s Sunday painting parties. Then one day she decided to join in.

In the ensuing two decades Sosa has gone from strength to strength. With a discerning eye for color combined with strong drafting skills and a love of textiles she depicts mostly Hispanic women in formal poses as she interprets their cognitive and spiritual existences.  “What I Love about San Antonio is how the cultures blend so beautifully,” Sosa told the Times Record News in 2012.

Sosa’s breakthrough came in 2007. She had been collecting Huipils, the highly decorative traditional blouses worn by Mexican women, for years. After viewing the New York exhibition Matisse and his Textiles which included drawings of women wearing decorative peasant blouses Sosa decided to create a series using the Huipil. But she went one better than Matisse and included parts of the textiles to create multi-media works to depict the contemporary women who admire, collect and wear these historically inspired tunics.

Since then Sosa has expanded her multi-media portraits adding digital printing to her painting and textiles to produce explorations of modern women’s interpretations of traditions that inspire. As she says about these works “Influenced by 18th and 19th century Spanish and Mexican portraiture, iconic religious images and masks they are elaborate with ornamentation. Inspired by folk art, the intended effect is quirky and unpretentious. “

The exhibition Her Self: Works by Kathy Sosa is currently on show at Florida’s Polk Museum of Art until the 14th of March. 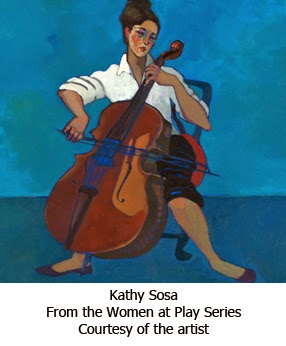