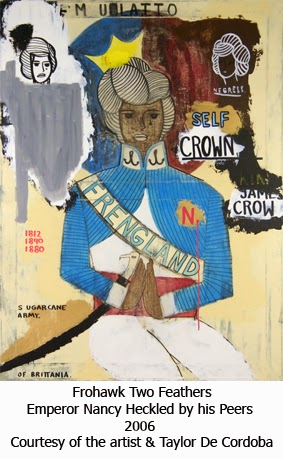 “I believe that as humankind we are the sum of our experiences, and,
to a greater extent our collective memory.”
Umar Rashid

Umar Rashid aka Frohawk Two Feathers is best known for his ongoing series about the imaginary Republic of Frengland. Frohawk Two Feathers, a word play based on his African and Native American heritage, is Rashid’s fictional observer of the saga of 18th Century imperial conflict and commerce overlaid upon the street culture of the 20th Century. As he told the Life and Times online magazine “Frohawk is the outsider looking in on the world, the noble savage who relays the stories of great empires and tiny tribes with wit, humor and scathing criticism.”

Rashid grew up in Chicago during the latter half of the last century before moving to Los Angeles. As he says, “As a kid growing up in Chicago, my earliest heroes and tormentors were the gangsters on my block. They had all the money and all the girls and jheri curls and I wanted to be just like them. I got my first taste as an artist with a graffiti crew called 3DB. When I moved to LA, I ended up on the east side and got to experience the Chicano side of gang culture. The gang graffiti was pretty much the same as it is in Chicago, but the facial tattooing is what really piqued my interest and is now somewhat synonymous with my work.”

With a lifelong fascination of history and geography, Rashid’s re-imaging if the Frengland epic, where the French and the English join up to take on the Dutch, is a given for his exploration of “the history of mad rulers and the Age of Exploitation.” As he told Open Studio’s New American Paintings “History and geography were always my favorite subjects so it makes sense that the majority of my work be centered in them. I start with a narrative and build upon it as the story plays out. I'm especially fond of using text as a medium, in the style of how images are displayed in historical texts. I want to deconstruct the perception of the ‘hero.’ I want to make them vulnerable.”

Last year Rashid broadened his repertoire with a series of works under his given name. A Smile That Ain’t a Smile but Teeth was series of self portraits as atypical African American stereotypes along with satirical renderings of advertisements for products and services that eventually kill a significant number of their users.

Despite Rashid scoping out a new direction for his work there is still one last hurrah left in Frohawk Two Feather's observations. Kill Your Best Ideas, The Battle for New York and Its Lifeline, the Hudson River is currently on show at the Hudson River Museum until the 17th of May. 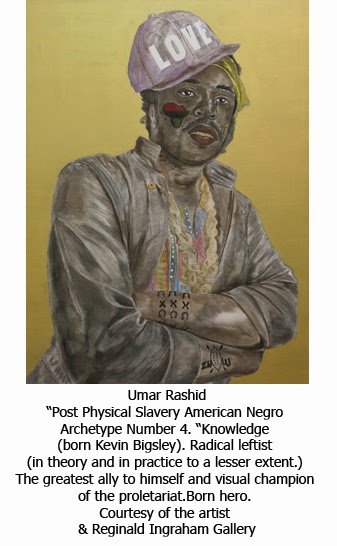 Want To Boost Your ClickBank Banner Traffic And Commissions?