It Starts With a Dot 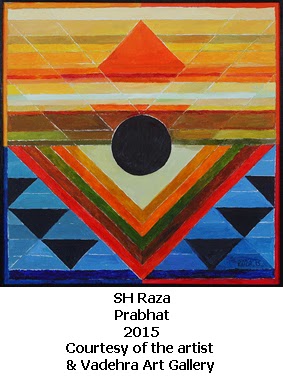 "Bindu is the centre of my life."
S H Raza

Bindu is the Sanskrit word for point or dot which carries the metaphysical connotation of being the point at which creation begins. It’s best known visual representation is the decorative devotional dot that Hindu women wear on their forehead.

The Bindu is also the starting point for Indian artist S H (Syed Haider) Raza’s paintings. As he has said “The process is akin to germination. The obscure black space is charged with latent forces asking for fulfillment. Like the universal natural order of the ‘earth-seed’ relationship, the original unit, the ‘bindu’, emerges and unfolds itself in the black space. All inherent forces unite. A vertical line intersects a horizontal line, engendering energy and light. Space is charged. Contours appear: white, yellow, red and blue, and along with the original black, they compose the colour spectrum of the visible world.”

Raza came of age in the same year that India gained her independence whilst studying at the Sir J J School of Art, an institution that followed a British curriculum. Along with K.H. Ara and F.N. Souza, Raza became a founding member of the Progressive Artist Group which was dedicated to replacing European realism with modern art that had an Indian voice. In 1950, on a scholarship from the French government, Raza attended the École nationale supérieure des Beaux-Arts in Paris for three years. Complying with a request from his French mother in law not to take her daughter away from her family, Raza remained in France for the next six decades, although he regularly returned to India to refresh his roots.

It was in the late 1970’s, during a period of introspection about his work, that Raza decided to seriously reconnect with his Indian heritage. As he told Rediff.com "I was not happy. I was looking for an Indian concept, a vision in my painting. I was till then a French painter. I did my own research and took what I felt was important. I integrated this ethnography, these icons in my work."

Central to this reconnection was the Bindu which Raza first encounter as a child. As he explained to Two Circles.net “One of my teachers in Mandla had once drawn a sign - a dot on the wall knowing that my mind was wandering. He told me to look at the point while he went for a wash. I did not understand the significance of the 'bindu' then - but it existed in my mind."

A mature examination of the concept and the ideas that underpin it combined with Raza’s French technique and the abstract paintings with their circles, triangles and squares that have made his name was born.

Not one to stand still Raza, now in his 90’s, still moves on, saying "I want to explore 'Roopadhyatmik (abstract beauty)' in my art. It is another spiritual form of abstraction which is beyond the conventional icons of triangles and the 'bindu'. The concept emerges from the dot... And I have to find my own way to reach it."

Raza’s current exhibition Aarambh is on show at New Delhi’s Vadehra Art Gallery until the 18th of March.