Tomorrow Belongs to Me “Our technology-driven culture's relationship to the natural
is the dominant theme in my work.”
Micah Ganske

The Hawaiian born painter and sculptor Micah Ganske makes paintings that look like digital prints and creates sculptures using a 3D printer, which given his subject matter is entirely appropriate.

About his painting the Deitch Projects website says “Ganske has spent his career developing a method of stain painting that is unlike anything being done in the art world today. Somewhere between Morris Lewis and batik fabric painting, the method of paint application can be so invisible that his brush-applied, acrylic on muslin paintings, are often initially mistaken as ink-jet prints.”

“My sculptures are designed digitally and produced using a MakerBot 3D printer,” he says. Ganske has also released a selection of his sculptural designs on the Thingiverse website for DIYers with a 3D printer to print their own versions under a Creative Commons licence.

Ganske’s works look to the future albeit with a realist rational of what has been before but rendered in a manicured optimistic aesthetic. As he says about his work “I want to make work which inspires and engages the viewer in what I truly believe is important and what drives me. I believe in space exploration and the pursuit of technology as the vehicle to the future. There will be bumps along the way, because we are flawed. Some advanced technology will be used irresponsibly or simply for evil. However, the progression of science and technology also represents the evolution of our species. We are the first species just smart enough to evolve ourselves outside of natural selection and Darwinian evolution.

A selection of his latest work will have its first West Coast showing at Los Angeles’ 101/EXHIBIT gallery. The Future is Always Tomorrow opens on the 17 of January and will remain on display until the 7th of March. 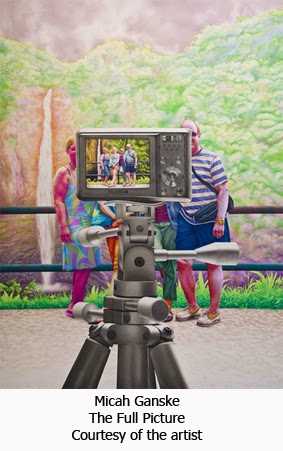