A Rubik Cube in Chinese Art 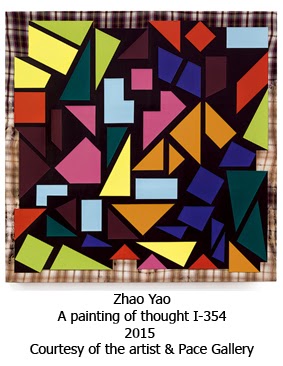 “If you are curious, you’ll find the puzzles around you.
If you are determined, you will solve them.”
Erno Rubik

In the 2006 film The Pursuit of Happyness Will Smith’s character Chris Gardner secures an interview for the job that will change his life by solving a Rubik’s Cube for the potential employer’s recruiter during a shared taxi ride. In 1974 the “cube”, the solving of which is often equated with intelligence, was invented by a Hungarian Professor of architecture, Erno Rubik, primarily to explain to his students spatial relationships. Six years later it was on its way to becoming the most popular toy in history.

About his cube, Rubik told CNN “probably the most characteristic part of the cube is the contradiction between simplicity and complexity. I think probably that's part of the key to the success of the cube -- you are able to have a connection with this order and chaos.”

It is a situation that is not dissimilar to what is happening in Chinese art according to Arne Glimcher, the number three art dealer in Forbes Magazine’s top ten. As he told the Phaidon Press website in 2012 “The Cultural Revolution destroyed the entire history of China for a generation. So you’re dealing with the oldest country in the world and the newest country in the world and that schism between who they were and who they are and that is happening in China.”

Enter to this milieu Chinese conceptional artist Zhao Yao. Using painting rather than installation to express his ideas, Zhao is “no longer concerned with making something that is simply interesting in itself.” As he says about his paintings “They are informed by observations of what others are looking at, and how they are looking.”

As Zhao explained to Time Out, Beijing “These pictures are imaginative. At the same time they are ready-made, taken from a series used to train kids to think logically; things like color patterns and exercises to teach them to move shapes around and form a new design. By integrating these lessons with the mass-produced cloth, these appear as abstract works of art.”

His current exhibition Zhao Yao: Painting of Thought is on show at Hong Kong’s Pace Gallery from the 15 of January to the 26th of February. 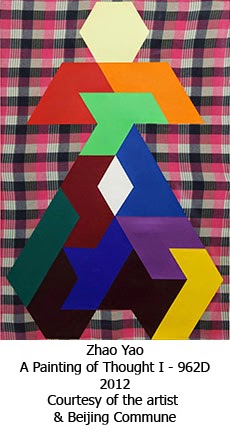