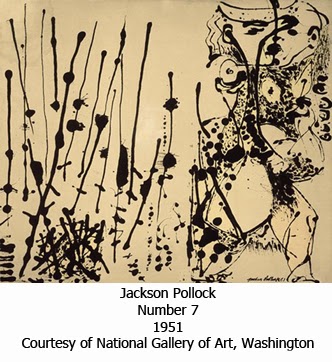 A not unfounded compliant for the young American painter Jackson Pollock to shout into the night air about the colossus of 20th Century art as he staggered home, drunk again. To which he would add "I'll show them someday," which he ultimately did do. For Picasso had covered and excelled at many forms of artistic expression, even inventing his own. But the Spanish master left one area untouched – action painting.

In the early years after the Second World War, Pollock was living in New York and making a name for himself in the New York art scene. He was also undergoing Jungian psychotherapy for alcoholism and depression, a treatment predicated on self discovery. In 1946, along with his wife Lee Krasner, Pollock moved from the city to a homestead in a rural hamlet near East Hampton. On the property was a barn that Pollock converted into a studio which saw him produce the majority of his formidable works.

Pollock would circumnavigate a canvas he had affixed to the floor upon which he would fling, drip and squirt paint. The traditional easel and brushes of his trade were left aside as he went on these journeys of self discovery. About which Pollock wrote “When I am in my painting, I'm not aware of what I'm doing. It is only after a sort of 'get acquainted' period that I see what I have been about. I have no fear of making changes, destroying the image, etc., because the painting has a life of its own. “

It was a performance, often with more than one act, which left a permanent record. As photographer Hans Namuth explained “A dripping wet canvas covered the entire floor … There was complete silence … Pollock looked at the painting. Then, unexpectedly, he picked up can and paint brush and started to move around the canvas. It was as if he suddenly realized the painting was not finished. His movements, slow at first, gradually became faster and more dance like as he flung black, white, and rust colored paint onto the canvas. He completely forgot that Lee and I were there; he did not seem to hear the click of the camera shutter … My photography session lasted as long as he kept painting, perhaps half an hour. In all that time, Pollock did not stop. How could one keep up this level of activity? Finally, he said 'This is it.'”

Whilst Time Magazine famously called Pollock “Jack the Dripper,” his contemporary Willem de Kooning said "Every so often a painter has to destroy painting. Cézanne did it. Picasso did it with Cubism. Then Pollock did it. He busted our idea of a picture all to hell. Then there could be new paintings again."

A current exhibition of his work Jackson Pollock: Blind Spots is on show at Tate Liverpool until the 18th of October. After its British showing, the exhibition will move to the Dallas Museum of Art where it will be on show from the 15th of November to the 20th of March next year.