The Trees are Blue 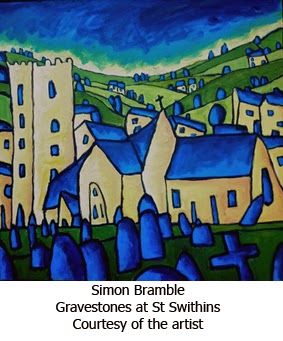 “I found myself off the tourist route and experiencing things not in the guide book.”
Simon Bramble

As a forensic scientist, who spends his days searching the detail for the devil therein, Simon Bramble brings this discipline of re-examining the obvious to the landscapes he paints of his beloved rural Devon. As he says “The contrast between when rural industry was everything and today’s mega-connected instant world is something I like to explore in my work by referring the eye back to something taken for granted.”

As a child, Bramble learned to draw at his great grandfather’s knee. A contemporary of the English poet and novelist Thomas Hardy, Bramble’s great grandfather, whose passion was drawing rather than writing, would critique the youngsters early artistic attempts.

After gaining a PhD in Chemical Physics, Bramble applied to the Chelsea School of Art to see if his artistic abilities warranted further exploration. About which he has said “My main motivation was to test myself to see if I was actually good enough to get in to art school. To my amazement and huge delight I was offered a place! It took 5 years of 3 evenings a week at college on the Kings Road, making work at home and in college on Saturday’s.”

Bramble now lives in the heart of Thomas Hardy’s Wessex, an area of south west England that has been designated as an ‘Area of Outstanding Natural Beauty’. Hardy created Wessex as fictional backdrop for his characters adventures but included enough factual information that allows modern day tourists to visit the places associated with the themes of progress, primitivism, sexuality, religion, nature, and naturalism inherent in his writing.

In a similar vein, Bramble’s uses the painterly concerns of modernism, heavily influenced by the Fauvists and German Expressionists, to view the landscapes that abound at his backdoor in a way that combines what has been with what it is today. As he says “I am constantly amazed how much there is in everything if only we stop to look and think. Pause and reflect.”

Consequently, he adds, “The trees are blue as (it works aesthetically!) it helps to make people look ‘again’ in a way a realistic representation would not.” 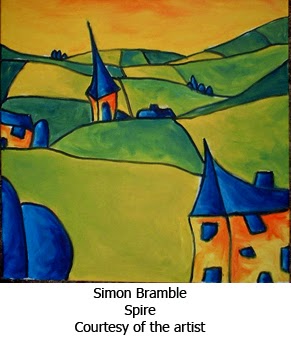