Realism and Optimism: It's the Real Beal 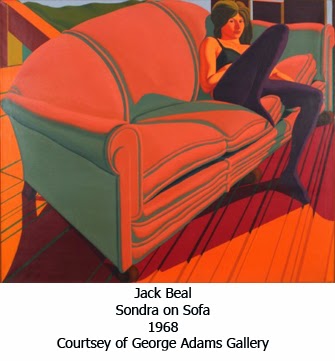 “It’s very much a matter of fact realism, sort of warts and all”
Les Reker

Three days after the horrific experience of seeing airplanes flying into the north and south towers of the World Trade Center a life affirming mural The Return of Spring was unveiled at the Times Square subway station. It is a modern day depiction of the Greek myth of Persephone whose return to earth from Hades each year heralds the end of winter; a metaphorical victory of life over death. The 7 by 20 foot (2.1 by 6 meter) glass mosaic work was created by the American social realist artist Jack Beal.

After three years at the School of the Art Institute of Chicago, Beal entered a world where abstract expressionism was all the rage. It was a style that Beal was neither comfortable with nor exceptional at and after flirting with figurative art he settled into the social realist genre. It was a courageous move, for as the New York Times art critic, Hilton Kramer wrote “Given the generally low esteem — a disfavor bordering at times on contempt — that the Social Realist impulse has suffered in recent decades, this is not a position likely to be a cause of envy.”

The Columbus Museum’s curator, Les Reker has said Beal, ”borrowed the bold lines and the sharp colors of abstract expressionism and slathered them into the figures and objects of traditional realism.”

Ever the optimist, Beal painted his still life’s, landscapes and figurative studies from an everyday point of view. As he said in a 1979 interview “I think that what we have to try to do is to make beautiful paintings about life as we live it.”

Author Eric Shanes in a monograph about Beal wrote, his “pushing of representational forms to their interface with abstraction has been responsible for the creation of the most striking and unusual images of the period.”

The exhibition Jack Beal: Hard Edge Paintings, 1968 -1972 is currently on show at New York’s George Adams Gallery until the 28th of February. 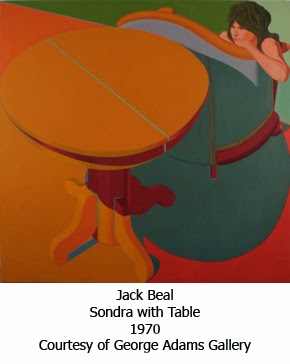