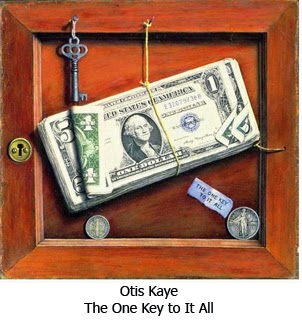 Whether as the quantifier for time or as the commodity that keeps the earth spinning, money has a major effect on our quality of life. This is particularly true in the visual arts where an artist’s success/importance is increasingly measured by the number of marks, yen or dollars they can command for their work, especially at public auctions. It is equally true that a lack of money is one of the modern world’s great motivators.

Such was the case for the German/American engineer Otis Kaye. He was financially wiped out when the Great Depression of 1929 crashed over him. Kaye’s response to this calamity was to take up painting and the subject he most often chose to paint was money. The precision inherent in his early calling was such that his depictions of dollars and cents are so accurate and realistic that even today viewers of his work are often tempted to try and pocket them from his canvas.

Little is known about the man mainly because he never exhibited his work. To have done so would have brought the wrath of the US government down upon his head. For in 1909 it became illegal to paint US currency. Consequently Kaye gave his paintings to friends and relatives and whilst he did depict other subjects he is believed to have sold only two paintings during his life time.

Best known for his technical virtuosity, Kaye’s compositions are as intriguing as they are inventive and he was not adverse to the visual pun, although his humor is often black and barely conceals the anger he felt towards the hand fate had dealt him.

Last Saturday Connecticut’s New Britain Museum of American Art opened an exhibition of his work, Otis Kaye: Money, Mystery, and Mastery which will remain on show until the 10 of May. 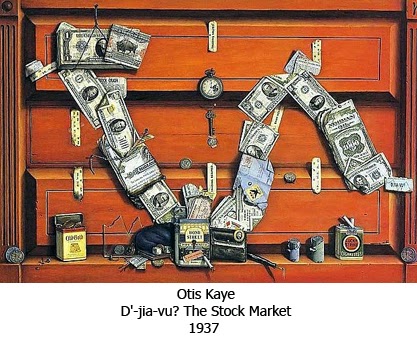 eToro is the most recommended forex trading platform for newbie and professional traders.