Colorful Tales from the African-American Past 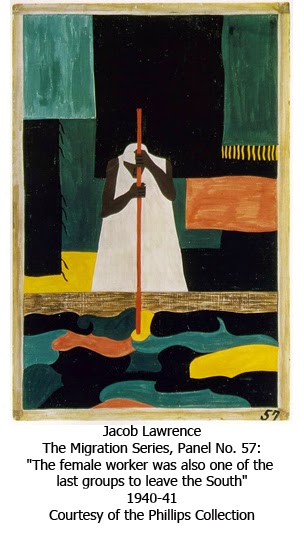 In his early teen’s African-American artist Jacob Lawrence’s mother sent him to arts and crafts classes at Harlem’s Utopia Children's House “to keep him busy.” Little did she realize that it would keep him busy for the rest of his life as a chronicler of African-American life in the United States. As he said later in life "Most of my work depicts events from the many Harlems that exist throughout the United States. This is my genre. My surroundings. The people I know … the happiness, tragedies, and the sorrows of mankind … I am part of the Black community, so I am the Black community speaking."

Growing up in Harlem at the tail end of the Harlem Renaissance,  an intellectual and artistic re-awakening by black Americans following the Great Migration in the early years of the 20th Century that saw millions of African-American’s move from the rural south to the urban north, this surge in the expression of African-American culture was a major influence in Lawrence’s work.

At the age of 23 Lawrence received national recognition for his Migration Series, a 60-panel set of narrative paintings, when it was shown at New York’s Museum of Modern Art. Influenced by Cubism in general and Matisse in particular his  flattened shapes, opaque and highly saturated colors and repeating patterns that often have rhythms and breaks that reflect the syncopations of jazz are a hallmark of his work.

The art critic Robert Hughes wrote in his book, "American Visions: The Epic History of Art in America" about the Migration Series, “He took on the task with a youthful earnestness that remains one of the most touching aspects of the final work, and goes beyond mere self-expression. As a result, you sense that something is speaking through Lawrence - a collectivity.”

Lawrence’s reputation as a significant American artist was consolidated a few years later by a solo exhibition at the Museum of Modern Art. Apart from his painting abilities Lawrence was also a skilled draftsman as his pen and ink drawings for University of Washington Press’ 1970 edition of Aesop's Fables attest.

But it is Lawrence’s experiences living within the African-American community that he attributed to having the greatest influence on his work. As he is reported to have said “In order to add something to their lives, [black families] decorated their tenements and their homes in all of these colors. I've been asked, is anyone in my family artistically inclined? I've always felt ashamed of my response and I always said no, not realizing that my artistic sensibility came from this ambiance.... It's only in retrospect that I realized I was surrounded by art. You'd walk Seventh Avenue and took in the windows and you'd see all these colors in the depths of the depression. All these colors.”

Twelve panels from Lawrence’s incomplete Struggle series are currently on show at Washington’s The Phillips Collection until the 9th of August. 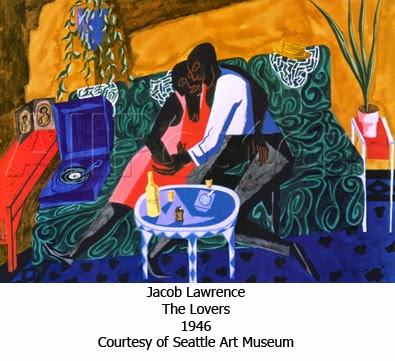