After Aparthid – The Art of Marlene Dumas 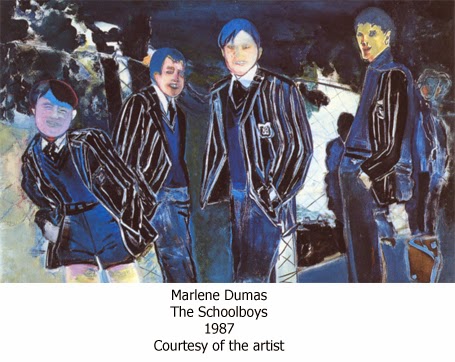 “I want to paint what you cannot see”
Marlene Dumas

For South African figurative artist Marlene Dumas the ghosts of her childhood Linger in her paintings with their restricted palette and portraits devoid of personality. About which she has written “I use second-hand images and first-hand emotions.”

Dumas grew up as part of the privileged class in apartheid South Africa where racism had been institutionalized and censorship was used to stabilize the regime. It was not until the early 1970’s, whilst at art school in Cape Town that the first cracks in this façade began to appear.

Attending a screening of Alain Resnais enigmatic love story Last Year in Marienbad left her perplexed, wondering why painting wasn’t as experimental. As she has said “I was totally perplexed. But I felt it was important to see how the film broke down the narrative structures, while there was still somehow a love story in it. So you could have the politics and the love story and a reflection on the medium.”

At the age of 23, a scholarship in the Netherlands showed her that painting was addressing these issues. Dumas also discovered modern and contemporary art, saw for the first time European classical art in the flesh rather than as reproductions along with un-censored news photographs and X-rated magazines. She also started to build her archive of newspaper and magazine photos which along with her own Polaroid’s are the source material for her paintings.

Painting from photographs liberates Dumas from being beholden to the subject; she can alter the composition to suit the painting’s needs. “People just want to explain everything in relation to that image,” she lamented to the New York Times’ Claire Messud, “all the better paintings should be something else.”  “It’s not really a young girl,” she explained, “It’s more an allegory.”

A point Dumas underscores with her titles which often shock and/or exhilarate and are imbued with a dark humor. As the curator of the Los Angeles Museum of Contemporary Art, Helen Molesworth explains “I don’t think people always get the humor, because she’s working out of that dark Northern tradition of bawdy gallows humor. Every punchline is, ‘And then you die!’ ”

The retrospective exhibition Marlene Dumas: The Image as Burden is currently on show at Amsterdam’s Stedelijk Museum until the 4th of January. In February 2015 it will open at London’s Tate Modern followed by showing at Basel’s Fondation Beyeler from the end of May to mid September. 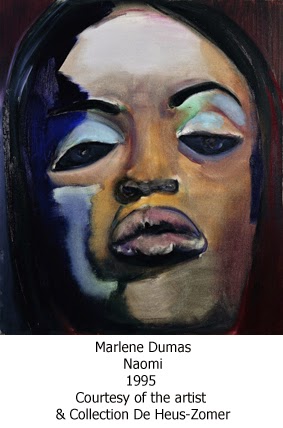