The title of the 1964 Tony Award winning musical which in 1971 was made into an Oscar winning film Fiddler on the Roof is said to have come from the painting of Marc Chagall. There is some understandable confusion as to which Chagall “Fiddler” painting is the definitive source as the precariously positioned musician is a recurring motif in several of his paintings. What is beyond confusion is the shared, worn on the sleeve, Jewish Russian sensibilities of the musical’s exploration of the fallibility of tradition and the mystical folkloric narratives of Chagall’s paintings.

An expatriate for most of his life, Chagall’s memories of his Russian homeland interwoven with his Jewish heritage are a constant in his work that avoids the illustrative linear narrative in favor of a poetic representation. As Surrealism’s founder Andre Breton said of Chargalls’ work “the metaphor made its triumphant return to modern painting.” Whilst the New York Sun’s art critic. Henry McBride wrote about Chagall’s 1941 New York exhibition “His colors sparkle with poetry.”

This poetic sensibility coupled with his distinctive subject matter enabled Chagall to maintain his unique personal style in the face of the myriad of 20th Century art isms that crossed his path. From his lovers to his circus performers, from his Old Testament heroes to the Russian landscape the recurring motifs of his dreams and myths are an unselfish gift to all who care to become acquainted.


For the next couple of months that acquaintance can be most easily made in the Italian city of Milan. Two hundred and twenty of his works are on show until February at Palazzo Reale in the exhibition Marc Chagall. Una retrospettiva 1908-1985. For those who would like to take one home there are 10 works available at Aatcurial's exhibition Sogni e leggende until the 20 January. 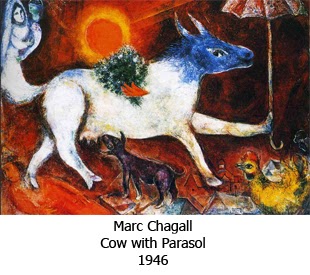