The Search for an Ideal – The Art of Moussa Tine 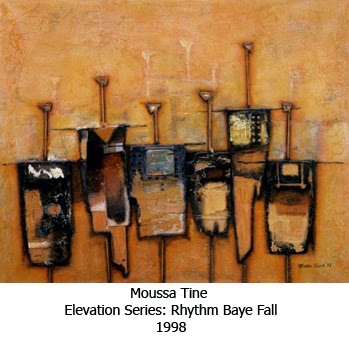 At the age of 61 Senegalese artist Moussa Tine is having his first London exhibition, a long journey from the streets of Dakar.

At the age of 17 with a desire to attend art school in his heart, Tine arrived in the Senegal capital and found work, through a cousin, as a conductor on a “car rapide” minibus. During quite times Tine decorated the vehicle with scenes from the life of Amadu Bamba, the Senegal founder of the Muslim inspired Mouride Brotherhood.

Such was his skill other bus owners request he paint their vehicles and Tine was able to give up being a conductor to open his own shop. He also expanded his subject matter to include his own designs along with depictions of the owner’s regional affiliations.

In 1974 he achieved his dream and was accepted as a student at the Institut National Superieur des Arts. With his afternoons free from classes, Tine was able to support himself through his bus decoration business, an activity he continued for a further 20 years.

At the end of his studies Tine along with a group of fellow artists created The Arts Village, a complex of 45 studios on the outskirts of Dakar. They had occupied several abandoned Army barracks. For six years they worked, held exhibitions and concerts until their eviction by the police. In 1998 the Senegal president, Abdou Diof, declared himself the Official Protector of the Arts and Literature at an exhibition opening. The artists immediately petitioned him to reopen The Arts Village which was granted, but at an old encampment for Chinese works. The Village was a success and continues to flourish today.

Likewise Tine’s reputation as an artist flourished with exhibitions in Europe and the Americas. About his work Tine has said “In Africa, the grouping of individuals is very important… People praying together create a certain atmosphere of forgiveness which in turn allows an individual to reach a state of bliss more easily. The group facilitates this process. This is why there is always a presence of masses of Mourides in my works… And groupings of people produce rhythm, but an innocence has been discovered as well. I am always trying to interrupt the grouping of people, a grouping that will lead to the ideal.”

Moussa Tine’s exhibition is on show at visual arts agency specializing in the promotion of African, and more specifically West-African art, Tafeta until the 16th of December. 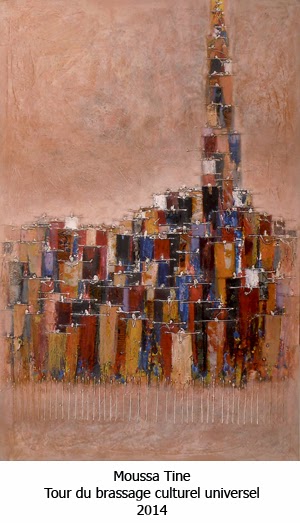