Historical Inspiration Meets the Selfie – The Art of Yasumasa Morimura 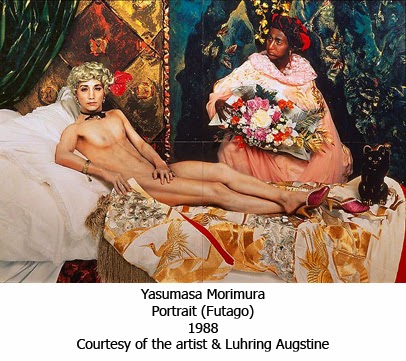 Into which of these two categories Japanese photographer Yasumasa Morimura will fall time will arbitrate and confirm. But until that comes to pass his career is progressing exceeding well with his latest exhibition "Las Meninas Renacen de Noche" showing concurrently in New York and Madrid.

Morimura appropriates images from both the western canon of art history and from western popular culture and repurposes them as self portraits. Using make up, costumes, props and computer manipulation his elaborate selfies have seen him assume identities that range from Rembrandt to Einstein, from Monet’s Olympia to Marilyn Monroe.

Apart from his Victor/Victoria works in which a Japanese male impersonates a western woman with all the cultural and gender bending implications that entails Morimura’s work also creates new narratives for paintings whose fame has turned them into clichés. He demands that we look again and reevaluate the preconceptions bred from familiarity.

In "Las Meninas Renacen de Noche” Morimura assumes the role of each character depicted in Diego Velázquez’s 1656 painting. As such he moves the artist from being the equal of the subject, a radical thought for the 17th Century, to the 20th Century notion of the artist and the subject becoming one and the same. A concept first expressed by Andy Warhol in his 15 minutes of fame and subsequently expanded upon by the 21st Century’s proliferation of the individual as subject in social media.

The double take the works often provoke attest to Morimura’s ability to infuse the disparate aspects of his vision, the historical and the contemporary, into a vehicle that parodies the audacity of his criminal intent.

"Las Meninas Renacen de Noche” is on show at New York’s Luhring Augstine Gallery until the 24th of January and at Madrid’s   Galería juana de aizpuru until the 20th of January. 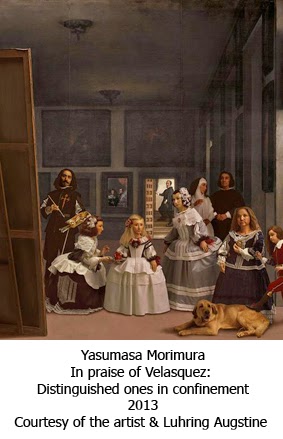