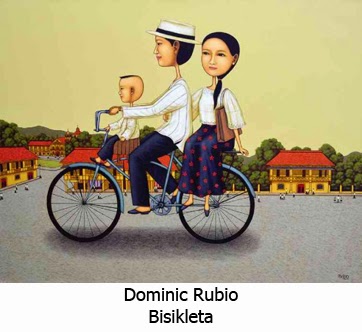 The Philippines colonial history is often summarized as “300 years in a convent, 50 years in Hollywood.”  Painter Dominic Rubio effectively captures this dichotomy in his nostalgic works; caricatures dressed in the fashions of a bygone era.

With an unworldly innocence reminiscent of the works of French painter Henri Rousseau, Rubio presents a cavalcade of Filipinos imbued with a Spanish significance overlaid with the gloss of Tinsel Town. It is a juxtaposition that works extremely well in defining the characteristics of the Pinoy that are still evident today.

It is not uncommon to see on the streets of Manila a family on a motor cycle as depicted in “Bisikleta.” This historical rendering of the practice, seen as extremely dangerous and irresponsible by Western eyes, places it in context. Although aware of its modern dangers they are of secondary importance to its connivance and the family bonding of mutually shared activities. That that connivance holds sway in the feudal democracy exercised by the country’s ruling elite is a broader societal critique that cannot be ignored.

Likewise the significance and importance of the Catholic Church in the lives of Filipinos both yesterday and today is underscored in the ”Advisor and the Pupil.” The depiction of the spirit of the intellect having only a fragile connection to the temporal flesh presents as a situation that can only be resolved by the adherence to a particular catechism.

And with their romanticized backgrounds presented in miniature almost like the models from a film set the people depicted become larger than life and dominate the proceedings. In a world in which the individual is becoming increasingly commoditized Rubio’s portrayals, albeit set in a simpler time, are refreshing departures. 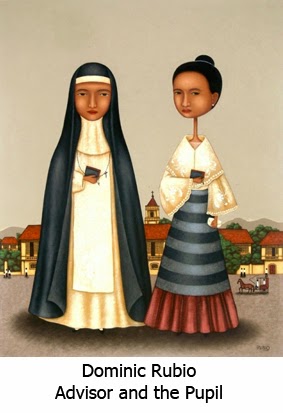