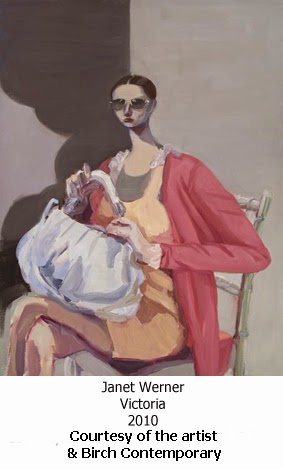 Canadian artist Janet Werner predominately paints the feminine; utilizing the genre of portraiture she presents a cast of characters that are all fictional. Using fashion magazines, popular culture, naive paintings and photography as source material, Werner’s women appear to be in a state of transition. “Something is happening. Or something is appearing to them or they look like they’re seeing something,” she has said.

Werner’s paintings are constructed images, a head from here, a dress from there; these mixtures from her sources are to a degree selfies. “I believe the work has a lot to do with my subjectivity because it’s the one that I understand the most and it’s also the one that I see reflected in culture the most. Images of women are everywhere,” she says.

From magazines to billboards the desire these images project informs her painting. Although presented as portraits they are not intended to convey an individual’s likeness.  Writing about her work, Werner said, “The paintings reframe the problematics of desire, using the mechanisms of melodrama, recontextualization, scale change, and shifts of color to pose questions about these images and to test the limits of their intended meanings.”

As James Patten, the director and chief curator of Western Univerity's McIntosh Gallery, which hosted Werner's touring exhibition Another Perfect Day during October, says, “That’s where art is really successful. It’s not a polemic telling you what is right or wrong but getting you to consider the issues and to think about your own life in relationship to them.”

Werner’s next exhibition Drop, Drop Slow Tears will be on show at Montréal’s Parisian Laundry Gallery from the 15th of January to the 14th of February next year. 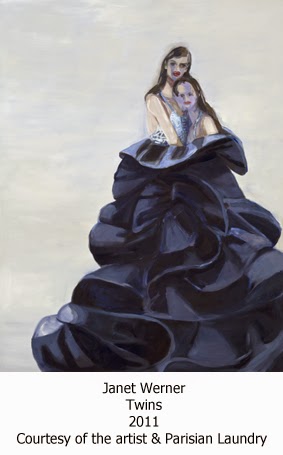