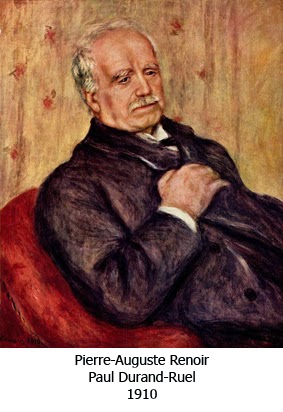 “Durand-Ruel was a missionary, fortunately for us, painting was his religion.”
Pierre-Auguste Renoir

The French art dealer Paul Durand-Ruel is credited as the champion of the Impressionist art movement whose dogged determination saw artists like Degas, Monet, Renoir, Sisley and Pissarro amongst others become the household names they are today. He is also credited with creating the gallery protocols of financially supporting artists, holding solo exhibitions, retrospective exhibitions for living artists, proactive press promotion, free entry to galleries and a network of international gallery spaces, practices that are still used by successful galleries today.

In the latter decades of the 19th Century Durand-Ruel provided monthly stipends to his artists so they could continue working and organized exhibitions of their work in the face of a hostile public and the public ridicule of the art establishment.

About his benefactor, Claude Monet said “Without Durand, all of us Impressionists would have starved. We owe him everything. He was stubborn, persistent. He risked bankruptcy many times to support us. The critics dragged us through the mud, but it was much worse for him! They wrote, ‘These artists are mad, but the dealer who buys them is more mad than they are’.”

Durand-Ruel’s introduction of the Impressionist’s work to the New York art market saw a turnaround in their fortunes. About this he quipped "The American public does not laugh. It buys!"

Paul Durand-Ruel also collected his artist’s works. By 1922 he had purchased more than a thousand works by Monet, approximately 1,500 by Renoir, more than 400 by Degas and as many by Sisley, about 800 of Pissarros works, close to 200 by Manet and almost 400 works by Mary Cassatt.

Just before his death at the age of 89 he declared “At last the Impressionist masters triumphed just as the generation of 1830 had. My madness had been wisdom. To think that, had I passed away at sixty, I would have died debt-ridden and bankrupt, surrounded by a wealth of underrated treasures…”

The exhibition Paul Durand-Ruel, The gamble of the Impressionists is currently on show at Paris’ Musee du Luxembourg until the 8th of February. This will be followed by exhibitions at London’s National Gallery in March and at the Philadelphia Museum of Art in June next year.
Posted by Henry Bateman