Birds of a Feather in the Business of Art 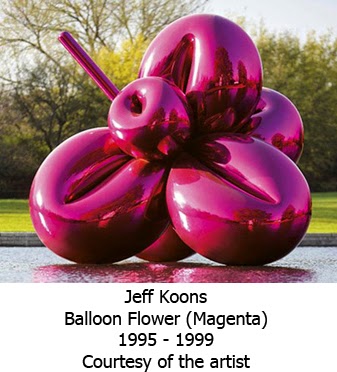 Koons really does think he's Michelangelo and is not shy to say so.
The significant thing is that there are collectors,
especially in America, who believe it.
Robert Hughes (2004)

A couple of weeks ago Jeff Koons’ first European retrospective exhibition opened at Paris’ Centre Pompidou, it followed close on the heels of New York’s Whitney Museum’s retrospective for the artist.

Thirty five years earlier, in 1980, Jeff Koons was a licensed mutual funds salesman with a day job as a Wall Street commodities broker. At the same time he held an exhibition of “fresh out of the box” vacuum cleaners in Perspex cases in the windows of New York’s New Museum.

A year earlier, Larry Gagosian had opened his first art gallery in Los Angeles. In the mid 80’s the man who the Economist Newspaper describe in 2011 as “the most powerful art dealer in the world” was shifting the center of his operations to New York.

Over the years Gagosian built a stable of name artists and worldwide gallery empire. The opening of his Hong Kong gallery ensured, as he quips “The sun never sets on my gallery." Gagosian also zealously guards the prices his artists receive for their works. He is known to attended auctions and bid for their works just to maintain their value.

Koons is a factory artist in the mold of Andy Warhol with up to 120 assistants working to realize his vision. Using a color by numbers system he developed, his works, although executed by many, look like the work of a single hand. As he says “I'm basically the idea person. I'm not physically involved in the production. I don't have the necessary abilities, so I go to the top people.”

And among the top people was Larry Gagosian. In was in the latter half of the 1990’s that Koons’ and Gagosian’s paths crossed in a meaningful way. Koons was working on his ambitious Celebration series, 20 sculptures each editioned in five different colors, when he ran out of money. Gagosian agreed to organize the funding of the project in exchange for exclusive sales rights.

Buyers paid $2 to $8 million, sight unseen, for the car sized balloon dogs, Valentine hearts, Easter eggs in general and “Balloon Flower (Magenta)” in particular. The latter was brought by hedge fund manager and art collector Howard Rachofsky who sold it at auction in June 2008 for $25.8 million making Koons the highest priced living artist sold at auction at the time.

A long time Gagosian client, Rachofsky is quoted as saying "Sometimes we don't know if the stuff we're buying is historically significant, but because the prices are so high, we need to believe they're important."

Although critics may carp, multiple retrospectives in the same year along with the support of a savvy dealer, Koons is unlikely to complain any time soon.
Posted by Henry Bateman

Get professional trading signals sent to your cell phone daily.