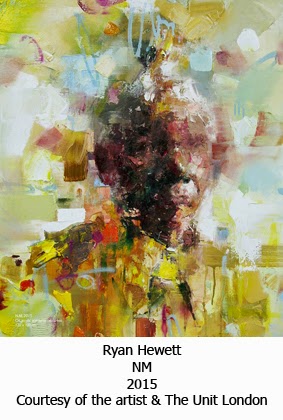 “Texture comes from losing the fear to apply paint on the canvas.”
Ryan Hewett

A chance encounter with the illustrations of the American born, London based artist Phil Hale was the catalyst that moved South African artist Ryan Hewett from a high school student who could draw to the abstract portraitist he is today. As he told arrested motion “It all started when I was exposed to the illustrations in Phil Hale’s book The Fantasy Art Masters, which brought me closer to abstract painting and further away from pencil drawing. It’s taken me a long time to get to where I am today; I’ve gone through different periods experimenting with different styles. It didn’t necessarily start with portrait painting. In the beginning, all I wanted was to be able to paint well. It’s such a unique feeling when you start spreading oil on canvas and the mess accumulates around you. I realized that there was more to painting than simply trying to copy a picture.”

As part of this process Hewett took time off from paid employment to teach himself how to paint. As he has said “I took about six months off between jobs to give myself time to learn how to move paint across the canvas, which was still very much based on my pencil drawings. I started with oil and my first painting - the first one that I looked at and thought, “this is it” - was a profile of an elephant.”

Over time Hewett learned how to create layers in his paintings which saw them become increasing more abstract and complex as his control of form and texture advanced. And as Hewett says today “A portrait without texture can look pretty, but there is still something missing. Texture anchors my paintings - its become an essential element of my work.”

As he explained to 1883 magazine “It’s a process of morphing realism with abstraction: within this process, the face will take many forms – certain features are enhanced while others fade.”

This is certainly the case with his latest body of work. Inspired by Pope Francis’ remark “Who am I to judge,” Hewett presents his depictions of 22 world leaders both past and present, heroes and villains. As he says about the works “I struggled with the concept for this show for a good few months because I had never created anything with such a potent theme before, and I’m not a politically driven person either. But, as an artist, I was compelled with this topic, and I felt that is was my duty to assemble all of these characters together in one room. In that sense, they’re humanized because in decontextualising them, they’re all on a level playing field.”

As the British writer and art critic Edward Lucie-Smith told Wall Street International “Hewett’s pictures appear on the painted surface in the form of extraordinary apparitions, present yet not present…It is not going too far, to say that these are participatory pictures – we become part of them, engaged by the act of looking.”

Hewett’s portraits are currently on show at The Unit London until the 24th of May. 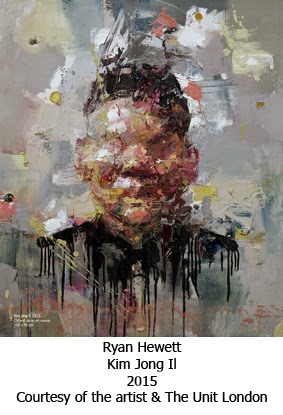