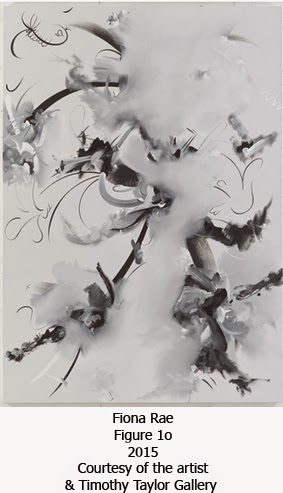 “I want to make paintings that are surprising


and that have something new to add to the history of painting.”

Abstract Critical’s John Holland wrote in his 2013 review of British abstract artist Fiona Rae’s paintings “She makes eye candy for the conceptually wear.” It’s a proposition Rae had addressed a couple of decades earlier in a Bomb Magazine interview when she stated “People have a lot of preconceptions about what paint language means: pink paint isn’t serious, but black and grey is, and I don’t understand that.”

And if her current exhibition is anything to go by a re-think of the commonly held concept of “eye candy” maybe required, for as the publicity states “These are abstract compositions teetering on the edge of figuration, expressively rendered in black, white and tones of grey.”

Coming out of the milieu of the 1980’s Young British Artists (YBAs), Rae has the distinction of being the lone dedicated painter of the group. As she told the Guardian newspaper in 2009 “What I love about painting is that it embodies a series of thought and feeling processes. It's all there on the canvas as a record. I can put something on the canvas, consider it, adjust it, remove it, replace it, add to it, conceal it, reveal it, destroy it and repair it. I can be in a good mood, a bad mood, a cheerful mood or a destructive mood - it's all useful.”

Whilst using acrylic and gouache paint, oil paint holds a special place in her esteem. As she states “Oil paint is the most fantastically malleable substance: once you've figured out how not to turn everything into a sludgy grey, oil paint remains wet long enough for endless changes of mind, and because of the way the pigment is held in the oil, it is beautifully luminescent.”

Like her Goldsmith College contemporaries the conceptual aspects of today’s art are part of her makeup. For as she has said “I suppose I think my attitude to painting is fairly conceptual.” To which she has added “My paintings have a fictive space, an invented abstract space that holds all the contents together - but I think that anything can go into that space, from heartfelt expressive marks to deliberately fashioned self-conscious brushstrokes to graphic signs and symbols to images of skulls and bambis.”

As The Brooklyn Rail’s William Corwin wrote in his 2012 review of her exhibition Fiona Rae: Maybe you can live on the moon in the next century “Rae’s paintings are very much objects to be admired; windows into worlds in which she is mistress, giving the viewer over to a semi-recognizable, occasionally comforting, but mostly alien dreamscape.”

Rae’s current self titled exhibition is on show at London’s Timothy Taylor Gallery until the 30th of May. 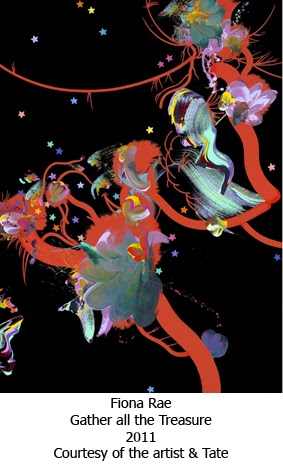