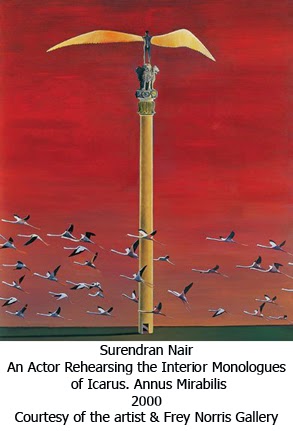 “I prefer to see myself as an artist who is bothered
about what is happening around us.”
Surendran Nair

Surendran Nair came to prominence in 2000 when his work An actor rehearsing the interior monologue of Icarus was ordered to be withdrawn from an exhibition at India’s preeminent National Gallery of Modern Art in New Delhi by the recently elected BJP-led National Democratic Alliance government for depicting The Ashoka Pillar (India’s national emblem) in a less than reverential manner. The other 24 artists participating in the “Combine—Voice for the New Century” exhibition withdrew their works in solidarity with Nair for this “blatant attack on artistic freedom” causing the exhibition to be cancelled.

At the time Nair was astounded that his painting “an allegorical means to suggest the need for reflection on our ties” could cause such offence. “I cannot understand how my painting of the Ashoka pillar with the Greek mythological character Icarus standing on top of it can be constituted as a slight to a national symbol,” he is reported to have said.

Known internationally for his allegorical paintings, Nair’s work combines the myths of India and the ancient Greeks with a dramatic flair placed in a modern day context. In an attempt to pigeonhole his work Nair is often referred to as a surrealist in the vein of René Magritte, a classification he rejects.

As he told the Times of India “It is a misconception. I am no surrealist! That is, if one were referring to surrealism in the sense that it explores the unconscious or the subconscious; in the sense that it is something inexplicable, absurd or magical, to a lesser degree, I would still say no. But one may find a semblance of it in a degenerated sense, at a technical level.”

In an attempt to classify his work Nair has stated about his Corollary Mythologies, “In a way Corollary Mythologies are about belonging and dissent. In that sense I imagine it to have political undertones, however subtle, which is informed of history, mythology, real and imagined events. Art history, notions of tradition and identity and its relationship with modernity, of language, sexuality, politics, religious and other faiths etc. Without emphasizing any of these in particular, I address these issues simultaneously. Sometimes rendered sentimentally, literally, cryptically or otherwise metaphorically oblique, they are both detached and reflective and at times often with a mischievous gaze, making innocent jokes, and at other times being ironical and quizzical too.”

Nair currently has two galleries showing his work. Mumbai’s Sakahi Gallery is showing Spatial Arrangements of Colours, Lines, Forms and Desires until the 31st of May and New Dehli’s Kiran Nadar Museum of Art is showing Surendran Nair: drawings, print and watercolours (1970s-1990s) until the 30th of July. 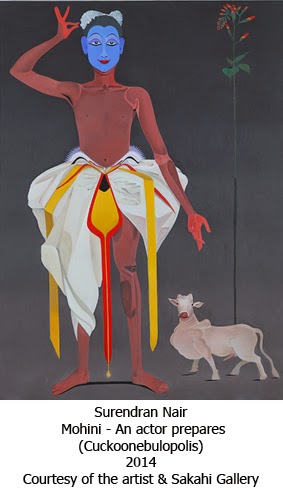