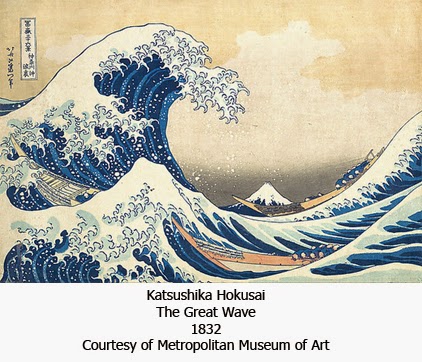 "If heaven had granted me five more years, I could have become a real painter."
Katsushika Hokusai

Regular readers of The Expat will have noticed that international borders are of little concern regarding the stories published. Yesterday it was an Indian photographer, the day before an American abstract painter and the day before that it was a Filipino collage artist. What they have in common is that they all produced visual art that is accessible to all who care to look. And with the aid of the internet this looking enables us to accept or reject the work they produce according to our aesthetic preferences and for other artists to incorporate that which appeals into their own work.

Hokusai was 72 when he made his world recognized masterpiece, The Great Wave. He had been influenced by the perspective, shading, and realism of the French and Dutch landscape painters which he sourced from the cheap prints of their works that wrapped the goods smuggled into Japan by Dutch merchants whilst the country was closed to the outside world.

It is a most un-Japanese work for its time, as andreas.com explains “Traditional Japanese would have never painted lower-class fishermen (at the time, fishermen were one of the lowest and most despised of Japanese social classes); Japanese ignored nature; they would not have used perspective; they wouldn't have paid much attention to the subtle shading of the sky... The Giant Wave is actually a Western painting, seen through Japanese eyes.”

After Hokusai’s death this work along with others and works by his contemporaries found their way to Europe where the reduced perspective, the lack of shadow, flat areas of strong color, and compositional variations attracted the attention of artists ranging from Whistler to Monet, from Gauguin to Picasso influencing their art in turn.

In his autobiography Hokusai wrote "From the age of six I had a mania for drawing the shapes of things. When I was fifty I had published a universe of designs. But all I have done before the age of seventy is not worth bothering with. At seventy-five I'll have learned something of the pattern of nature, of animals, of plants, of trees, birds, fish and insects. When I am eighty you will see real progress. At ninety I shall have cut my way deeply into the mystery of life itself. At one hundred, I shall be a marvelous artist. At 110, everything I create; a dot, a line, will jump to life as never before.”

Whilst he didn’t make it to 90, Hokusai died at the age of 89; the legacy of his work has lived on not only crossing borders but centuries as well.  And whilst at the top of the right hand side bar of this blog there is a button to translate the words into the readers preferred language the works of art presented need no such assistance.

The self titled exhibition Hokusai is currently on show at Boston’s Museum of Fine Arts until the 9th of August. 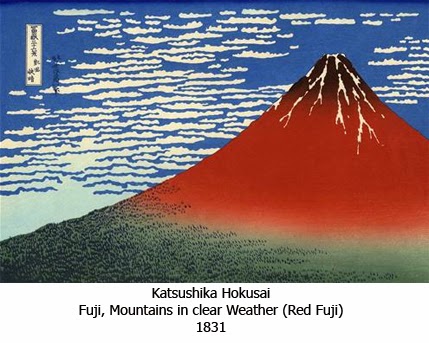