Amidst the Dog’s Of War 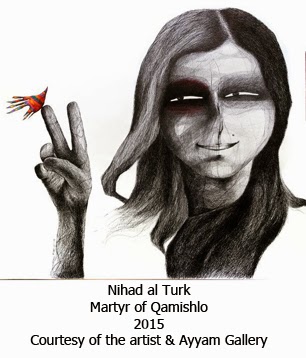 “I don’t know what they teach in the academy.
I’m like a black sheep.”
Nihad al Turk

Syrian artist Nihad al Turk’s home town of Aleppo has become a metaphor for the Syrian art scene. What was at the turn of the century an integral part of the bourgeoning Middle Eastern art scene has through the shelling, car bombings and curfews become an artistic ghost town. With the help of galleries like Damascus’ Ayyam Gallery, Syrian artists have fled the carnage of their country’s civil war to Dubai, Beirut or Cairo in an attempt to preserve a part of the artistic legacy of their homeland.

Now living in the Lebanese capital, al Turk is amongst that number. A situation reflected in his work as the press release for his current exhibition states “subjects that appear to shift in place as masses trapped in disfigured shells.” Although it’s not that far removed from his earlier work about which he told Nadia Muhanna’s blog “We live in a region full of war and economic hardship, so people will inevitably be slightly deformed.”

One of five children, al Turk grew up in severe economic hardship and left school at the end of his primary education during which his drawing abilities were clearly evident. Al Turk taught himself to paint during his teenage years and held his first exhibition in 1992 at the age of 20 which had a profound effect upon his subsequent work.

For the exhibitions 27 days al Turk, who was doing his military service at the time, went AWOL. This saw him sentenced to four months jail in Syria’s notorious Tadmor Prison. Reflecting upon his release al Turk has said “I felt like a sheet of shattered glass, my only release was painting.”

And paint he did, producing a body of work that saw culturetrip.com place al Turk amongst Syria’s top 10 artists saying “His works are complex multi-layered compositions that explore the psychology of man. Taking into examination existentialist questions, myths, power struggles, his paintings are rich in symbols woven into intricate narratives. His rich visual imagery ranges from monstrous creatures and mythical demons to still lives and botanical elements that stand for anti-heroes, outcasts and rebels.”

Whilst international recognition has come his way the continuation of poverty, political and social injustice will find a place in his work. As he says, “As long as there’s no justice in life, tension will never leave my life and therefore my paintings.”
His exhibition Nihad Al Turk: Drawings on Paper is currently on show at Beirut’s Ayyam Gallery until the 28th of May. 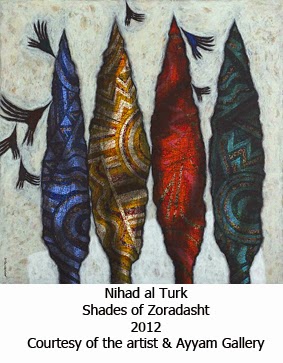