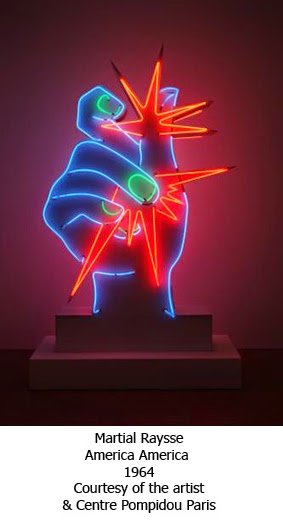 “Being an artist is a heavy responsibility
because all artistic activity plays with people's minds.”
Martial Raysse

The French artist Martial Raysse has been labeled as being French Pop, European Neo Avant Garde and the School of Nice all of which he regards with ambivalence. As told Art in America’s Aimee Walleston last year "I do not think my work belongs absolutely inside any of these boxes."

It is only recently that Raysse has re-entered the public gaze. From 1980 he has lived in a self imposed exile on a remote farm near the town of Bergerac in South West France. As he told the Wall Street Journal “I live with my wife, who is also an artist, near Bergerac, in the Dordogne. It's an old farm—very rustic, very beautiful. We have no neighbors and don't receive guests, not even our good friends. My studio is in a stone barn. For a long time, we had cows. I used to sell them instead of my paintings.”

"I felt the sudden weight of commercialism on my art and I thought I was going to lose my soul,” Raysse says was his reason to seek solitude. And during this time of self reflection his work changed from the examination of the obsession and worship of advertising and commodities using fashion images, found objects and neon illuminated sculptures to allegorical works that mine the history of art with an interpretation that expresses the values of today.

For Raysse many of these values he found though the written word. In his youth Raysse had dreams of being a writer and it was whilst studying literature that the 19 year old started making sculptures from found objects. But the love of books stayed with him even though he pursued a career in the visual art and in his library there is a well worn copy of Robert Pirsig’s 1970’s bestseller Zen and the Art of Motorcycle Maintenance.

One of the take a ways from Pirsig's journey of self discovery is ”The only Zen you find on the tops of mountains is the Zen you bring up there” which could equally well describe Raysse’s journey. For as he is quoted as saying in the publicity for his current exhibition “I’ve always thought that the purpose of art is to change lives. But the important thing today, it seems to me, is to change what surrounds us on all levels of human relationship. Some people think that life is copying. Others know it is inventing. You don’t quote Rimbaud, you live him.”

Raysse’s latest exhibition is a self titled retrospective which is currently showing at Venice’s Palazzo Grassi until the 30th of November. 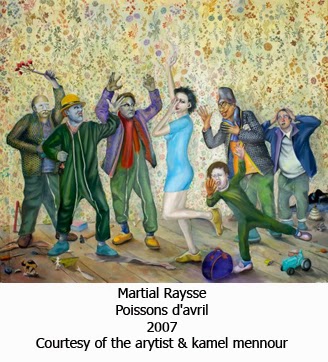 Need To Increase Your ClickBank Banner Commissions And Traffic?