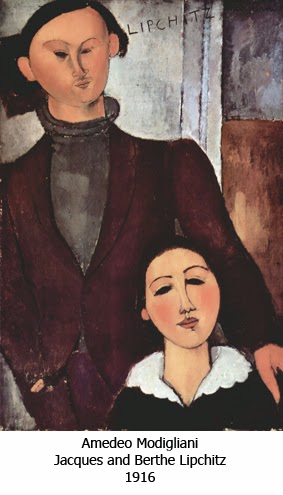 “When I know your soul, I will paint your eyes”
Amedeo Modigliani

Jeanne Hebuterne’s devout catholic parents disapproved of their daughters liaison with the handsome Italian artist Amedeo Modigliani who was in their eyes “a debauched derelict, and Jewish besides.” In their three years together Hebuterne was Modigliani’s lover, mother of his daughter, Jeanne, and muse. Modigliani painted her numerous times, sometimes with detailed eyes, sometimes with opaque eyes.

Perhaps even more so than the other great tragic of French art, Vincent Van Gogh, Modigliani’s life gave birth to the romantic cliché of the tormented artist whose life is cut short by an early death.
A sickly child (pleurisy, typhoid fever and when he was 16, tuberculosis) Modigliani was able to manipulate his mother into supporting him to become an artist. Whilst studying in Venice he started to self medicate with alcohol and hashish and adopt a bohemian lifestyle.

An avid fan of both Nietzsche and Baudelaire which coupled with his ill heath caused Modigliani became primarily a studio painter concentrating of nudes and portraits. As he is famously reported to have said   “What I am searching for is neither the real nor the unreal, but the subconscious, the mystery in the human race.”

At 25 Modigliani moved to Paris where his dependence on his self medicating drugs became an addiction whose debilitating effects rivaled their cause but still enabled him to mix in society, where he is reported to have often introduced himself with, “Hello, I’m Jewish” to strangers in cafes, especially if pretty. For in Paris in the early years of the 20th Century as The New Yorker’s Peter Schjeldahl notes “Drunks were tolerated; carriers of infectious diseases were not.”

Eleven years later and Modigliani’s tuberculosis won the day and that Hebuterne, pregnant with their second child committed suicide within 24 hours the father’s death is the stuff of legend. For during his life Modigliani sold very little and had only one solo exhibition. His fame came posthumously with the public whilst critics are still less than impressed.

Ranging from Schjeldahl’s faint praise “I recall my thrilled first exposure, as a teen-ager, to one of his long-necked women, with their piquantly tipped heads and mask-like faces. The rakish stylization and the succulent color were easy to enjoy, and the payoff was sanguinely erotic in a way that endorsed my personal wishes to be bold and tender and noble, overcoming the wimp that I was. In that moment, I used up Modigliani’s value for my life. But in museums ever since I have been happy to salute his pictures with residually grateful, quick looks.” To the Guardian’s Laura Cumming’s “Modigliani has been going nowhere for years - one seated woman, hands winsomely clasped, after another, with not much more than a hankie or hair colour to distinguish them.” They are far from flattering.

Perhaps the fairest critique comes from the Oxford University Press “Given Modigliani’s limited subject-matter in painting and sculpture, he achieved an extraordinary range of psychological interpretations of the human face, maintaining his individuality through his distinctive elongations of face or form.”

The exhibition Modigliani: A Unique Artistic Voice is currently on show at London’s Estorick Collection until the 28th of June. 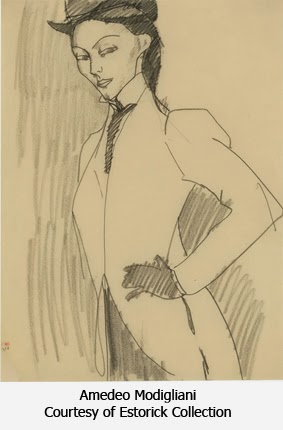