There’s Got To Be Clowns 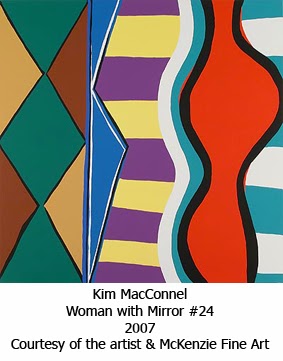 “Minimalism was about austerity and my work is rooted in exuberance.
This wrestling match is always going on in art,
and I'm absolutely clear about which side I'm on."
Kim MacConnel

Fueled by a cynicism of having survived a personal version of Apocalypse Now in his early 20’s the contemporary American artist Kim MacConnel challenged the austerity of the minimalist and conceptual art movements with cheap and cheerful works; banners, painted furniture and plastic clowns. A maverick escaping the serious social issues of the day by making utilitarian designs which he achieved by turned their underling conventions upon themselves.

Prior to his stint in Vietnam with the merchant marine MacConnel made his first work of art as an act of rebellion. As he told The LA Times’ Kristine McKenna, “I went on to Rutgers University where I spent two miserable years drinking and playing cards, prior to flunking out when I was 18. I was such a hopeless case at Rutgers that just before flunking out I bought some paint and covered the wall in my room with a big, awful, abstract painting. That was the first time it occurred to me to make any kind of visual art; I wasn't one of those kids who drew.”

Upon his return from Vietnam MacConnel for want of something better to do enrolled in an art class. Encouraged by the teacher, MacConnel went on to enroll at University of California, San Diego graduating with a MFA in 1972. "I mowed a lot of lawns for several years after I got out of school," he has recalled. "Nobody on the West Coast would touch my work.” Nor in New York until the Holly Solomon Gallery gave him a solo exhibition in 1975. In the same year MacConnel was included in the Whitney Museum of American Art Biennial as well as in 1977, 1979, 1981, and 1985.

An avid bodysurfer, he hits the beach twice a day, MacConnel collects the plastic detritus the sea regurgitates. “I've collected trash all over the world (India, Africa, Mexico) and I mix it all together. I mostly pick up aged stuff that looks like it's been floating around a while, but I don't collect aesthetically--I'm not looking for treasures or bright sea shells. At the same time, I don't pick up everything because if I did I'd have a room full of fast-food wrappers,” he says.

The idea for the clowns came from the Guggenheim’s 1993 exhibition “The Age of Iron.” “I looked at the show I just thought, 'Bing! Clowns are where it's at!' There were no clowns in that show,” he has said, "but it made me realize we're living in the age of plastic.”

In 2007 MacConnel created a new series of more traditionally based works Women with Mirror based upon Picasso’s primitive backgrounds with a healthy nod in the direction of Matisse’s cutouts. As MacConnel states at Margeaux Kurtie Modern Art “Abstraction or non-representational/non-objective design has always existed in tribal societies as what we call ‘decoration.’ We Westerners cut out a piece of this decorative pastiche and have isolated it into an expanding tradition of its own through the construct of theory and rationale. My feeling is that if one takes away the intellectual constructs supporting so called modern abstract art, one is essentially left with decoration.”

MacConnel’s current exhibition Black & White is on show at La Jolla’s Quint Gallery until the 2nd of May. 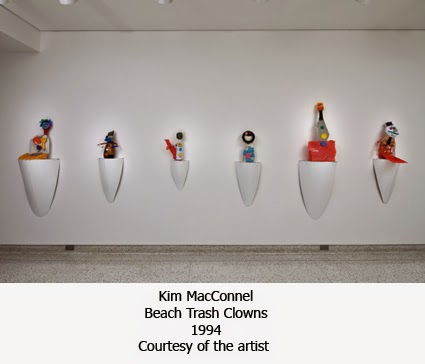