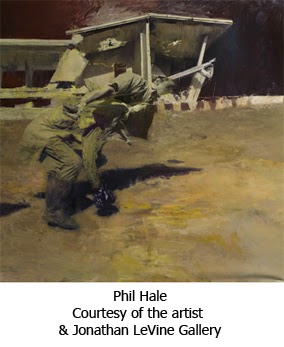 To choose to be an artist was known territory. I didn’t have to fight to make my way, the path was already there, and it was part of our everyday life (which is to say museums, libraries, music etc.)
Phil Hale

For the American born painter and photographer, who lives and works in London, it was almost a given the Phil Hale would become an artist. His family tree is littered with artists including both his mother and grandmother who were painters in their own right. As Hale told Erratic Phenomena’s Amanda Erlanson, sibling rivalry played its part too. “My own drawings could probably be neatly divided into my own work (skulls, hairy pot-bellied monsters, worms) and attempts to do my brother’s drawings better than he could (flowers, seascapes, spiders). And because my mother was an artist, the materials and environment was very conducive – invisibly conducive.”

Apprenticed to the illustrator Rick Berry at the age of 16, the association lasted for five years until Hale moved to London tread his own path. As he has explained “I’ve said this before, so it’s in danger of becoming its own cliché, but I left the country to get away from his influence.”

Berry believed that that the figure should be created from the imagination whilst Hale wanted to connect with reality. As he says “I wanted the paintings to have a feeling of connection to something outside the frame of the image, just as a documentary photograph does.”

Working on the darker side of illustration Hale was a natural fit to do the illustrations for Steven King’s The Drawing of the Three. It was a very generous gig and afforded Hale the luxury of not having to do any paid work for five years. Of that time Hale has said “I had a lot of fun. I recorded a lot of music and designed and built motorcycles, experiment with photography and much looser painting.”

The arrival of Photoshop in the 1990’s saw Hale incorporate photo-collage into his practice with the artificialness of the construction being explicit. About which he claims “It tells you something about not only how vision works, but about how imagination and narrative works.”

Being awarded an equal second place in the 2001 BP Portrait award followed by a 2008 commission to paint the then British Prime Minister, Tony Blair’s portrait saw Hale’s transition into the world of ‘fine art’ receive a significant boost.

Hale’s current work builds upon his twin interests of painting and photography and how they interact and influence each other. As the University Collage of London’s Michiko Oki states “Rather than a collage that expects ‘new’ meaning to emerge out of the juxtaposition of different visual orientations, his paintings aim for the disappearance of one image into another, one narrative into another, one system of seeing into another, and are haunted by the desire to move away from what it originally was”

Hale’s exhibition Life Wants to Live will be on show at New York’s Jonathan LeVine Gallery’s West 20th Street gallery from the 21st of February to the 21st of March. 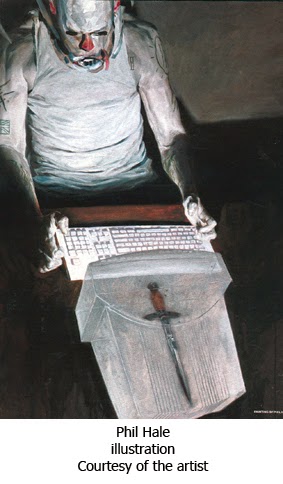