Change is the Only Constant 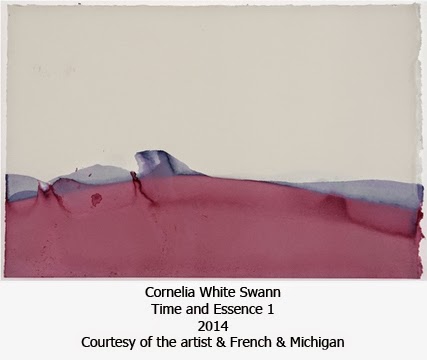 “The distinction between the past, present and future
is only a stubbornly persistent illusion.”
Albert Einstein

One of the major preoccupations in the Arts is the preservation of the holdings entrusted to its care. From museums restricting exhibition times for light sensitive works to the digital imaging industry’s ongoing research for archival inks that can last centuries rather than decades. Longevity is the name of the game.

But one artist bucking this trend is the American abstract painter Cornelia White Swann. With a long held interest in what she calls the “poetics of time and space” White Swann explores the relationships between the built environment and the people who inhabit the created spaces along with nature’s interaction with the same terrain. As she says “I’m interested in the dialogues that can occur when two disparate forms exist in the same environment. This curiosity evolved with my observations of the urban landscape; the strong architectural lines of a building existing with the organic forms of clouds passing behind it or the desire paths left by pedestrians seeking the route of least resistance.”

Until recently White Swann had been using synthetic acrylics as used by the advertising and sign printing industries on synthetic paper to record her observations whilst using her studio floor as an easel. As she explained “The fluid paints blend into each other creating new colors, leaving behind meandering striations over time. Desire paths emerge on the paper, responding to the uneven surface of my studio floor. The outcome of mixing these processes is a unique conversation between the two forms.”

Her latest works have seen her abandon the long lasting acrylics in favor of pigments derived from the natural world of flowers, fruits, vegetables, herbs and other plants with their subjective reaction to light. As White Swann expounds in her artist’s statement about these works “Depending on the amount of exposure to light, the color derived from plants evolves over time. The vivid colors of purple and magenta hues of blueberries and pomegranates slowly turn to ambers and greys.”

The life cycle of these works will be recorded photographically with the works being displayed again in a year’s time. Like the changes that inspire her work the works will impose their own changes upon themselves. The persistent illusion of permanence will be erased by the imperative of living in the moment.

The first of White Swann’s exhibitions Fugitive Color 1 is currently on show at San Antonio’s French & Michigan gallery until the 25th of April. The second exhibition is scheduled for the spring of 2016.

Did you know that you can shorten your long links with AdFly and earn money for every click on your short urls.

Want To Boost Your ClickBank Traffic And Commissions?