The Treachery of Images Lives On 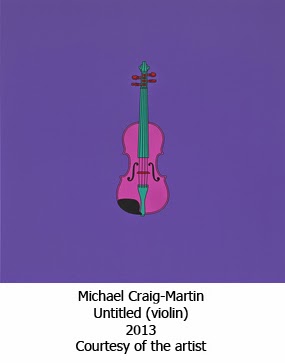 “Things don’t need to be special to be wonderful.”
Michael Craig-Martin

Born in Ireland, Craig-Martin grew up in America and now lives and works in London. It was during his formative years that he became enthralled by the look of the modern world. As he told The Telegraph’s Mick Brown, “‘I was a kid when American cars had fins – all those great Cadillacs and Chevrolets – and they were two-tone. I loved all of that. I then discovered modern architecture, modern graphic design, and modern fashion.” The further discovery of Marcel Duchamp’s ready mades set Craig-Martin onto the road to becoming an artist himself.

Recognizing the importance of Duchamp’s credo that creative expression can take any form, Craig-Martin followed in the footsteps of his hero’s, Picasso, Monet, Rembrandt and Michelangelo, and started creating his highly stylized renderings of the everyday items that surrounded him. As he has said “Everywhere I look, there’s something else to draw.” To which he adds “The greatest way of honoring the past is to make things that are appropriate to the present.”

"The real wonderment to me is that we are able to see one-dimensional images as the thing they represent," Craig-Martin says about the art he produces. "It’s extraordinary if you think about how much of our lives depend on the ability to see something that isn’t actually the thing itself."

The pivotal point in Craig-Martin’s career came in the late 1970’s when Australian Customs refused entry to his conceptual work An Oak Tree on the grounds that it was vegetable matter, a banned import for the Island continent. It is, in fact, a glass of water on a glass shelf with a wall label arguing the artist’s contention that it is an oak tree. About which Craig-Martin has said "It was of course a wonderfully funny incident, particularly because it extended into 'real life' the discussion about belief and doubt, and fact and fiction I was addressing in the work."

Like Rene Magritte’s seminal work ceci n’est pas une pipe (this is not a pipe), Craig-Martin’s ‘pictorial ready-mades’ of mass produced objects explore the enigma of the relationship between an image of an object and the object itself. To which he adds the caveat “But if I don’t somehow catch your imagination enough, if I don’t make your belief system buy into what I’m saying, then you won’t see it that way.”

An exhibition of his work Now – Michael Craig-Martin 2015 China Tour is currently on show at the Shanghai Himalayas Museum until the 31st of March. 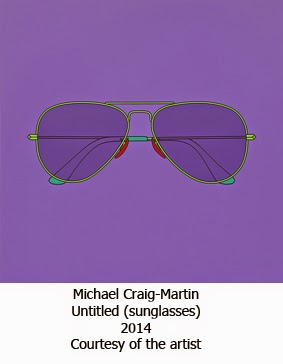 Email ThisBlogThis!Share to TwitterShare to FacebookShare to Pinterest
Labels: an oak tree, Art, conceptual, everyday, Michael Craig-Martin, painting, this is not a pipe

I have a favourite quote of his "...what one does essentially as an artist is that you create a highly limited situation in which to operate and then you use it in such a way that people don't think it’s limited at all..." from Michael Craig-Martin talking to John Tusa inTusa's book The Janus Aspect .﻿

Can't argue with that