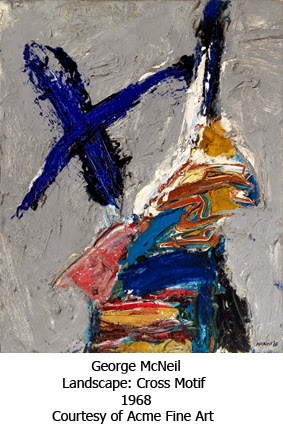 “The only great painter I really feel tied to all the time is Cezanne.”
George McNeil

George McNeil was stalwart if unsung practitioner. A contemporary of Jackson Pollock, McNeil, like Pollock, placed his canvases on the floor so he could work the painting from all sides, but unlike Pollock, McNeil felt no need to abandon the traditional tools of the craft.

Respected by his colleagues, McNeil believed that a “painting stood absolutely on its own merits and on its own terms.” As he told the Archives of American Art’s oral history unit in 1965 “What I want in art very much is a kind of organic life, a living quality where the work of art sort of simulates life or is analogous to life.”

The founder of the American Abstract Artists group and a first-generation member of the New York School, McNeil was fiercely independent with definite views about the art he was making. As he explained in his 1965 oral history “I think they [the cubists] academicized painting in terms of the rigidity of structure and particularly in terms of this objectivity because when you think of it Picasso really has not painted any abstract paintings. They are always figurative, they are always variations on some kind of figuration. Now there's no virtue in being abstract, God knows that's true, but I think the movement toward energy and the movement toward life and the movement toward a kind of massive statement transcending objectivity was started by Cezanne, was picked up by the Fauvists and by Kandinsky. Then I think it was simply stopped by cubism and I don't think it was until about 1945 that it again emerged in abstract expressionism.”

McNeil’s early work was predicated on form and color with a palette often described as cheerful. But in the 1960’s figures started to emerge from his patterns of color. About which he has said “There's a fascination when the figure comes out. It's like meeting somebody - a little bit of magic in it perhaps.”

These figurative inclusions in his work continued for the rest of his career. As the New York Times John Russell wrote in his review of McNeil’s 1983 exhibition “The dark night of the soul plays no part in these paintings. McNeil sees the world as a place in which people kick up their heels as often as they can, and he has taught his paint to do the same."

The exhibition George McNeil: About Place is currently on show at Boston’s Acme Fine Art until the 21st of February. 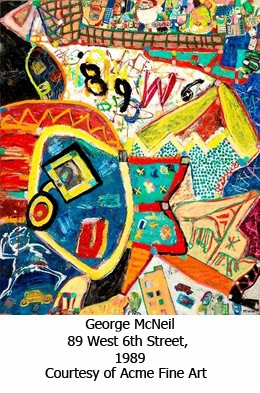