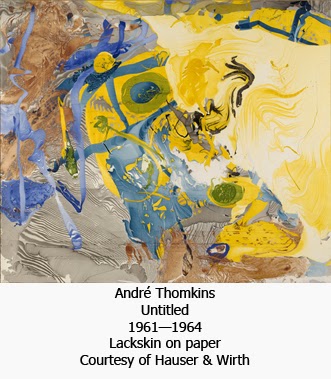 “Eclectic in his choice of mediums, he tried everything,
discovering his ‘Lackskin’ technique accidentally”
Art on Paper (2009)

The chore every painter faces at the end of their working day is the cleaning of their brushes. Using soap and cold water they return the tools of their trade back to a near pristine state reading them for the next session of work. And it must be cold water. The use of warm or hot water will caused the brush’s metal ferrule to expand allowing the bristles to fall out, a disaster for the artist who has spent the last month convincing themselves that the newly acquired $100 sable bush is not an indulgence.

It was whilst engaged in a variation of this ritual that the Swiss artist André Thomkins discovered his ‘Lackskin’ printing technique. A mono-print, that uses a water bath rather than a solid plate on which to create the transferable image.

It was whilst he was painting the crib for his newly arrived second son that he placed his brush in water and saw the paint detach itself from the brush and spread out over the liquids surface. Intrigued, he captured the design on paper and the ‘Lackskin’ technique was born.

As he explains “A drop, or string of thick gloss paint trickles onto the water, spreads and covers the surface. Forms that result can be constantly changed by interplay between artificial and natural forces. When you blow on the paint it drifts in the desired direction and dissolves into grey scales of photographic fineness that suggest a plastic presence. With drops or strings of paint then thrown or drawn onto the emerging painting you can change the landscape.”

The Swiss artist spent most of his life in Germany where he produced a body of work that along with his ‘Lackskins’ included painting, drawing and sculpture mostly in the dada and surrealist mode. Whilst Thomkins experiment within all his areas of endeavor it was his ‘Lackskins’ that captured the interest of the public and the critics alike. As Artforum said of their 2009 London exhibition “It’s as if one is experiencing a sequence of natural phenomena only to realize that some wizard is secretly controlling everything.”

The exhibition André Thomkins: Works 1946 – 1985 is currently on show at Zurich’s Hauser & Wirth Gallery until the 30th of May.


If you enjoyed this story and would like to read more stories like it in the future
contribute to Enable the Expat to help keep The Expat publishing. 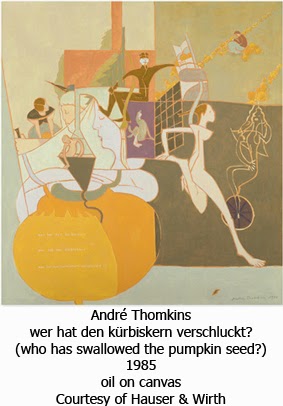