One Man and Two Cultures 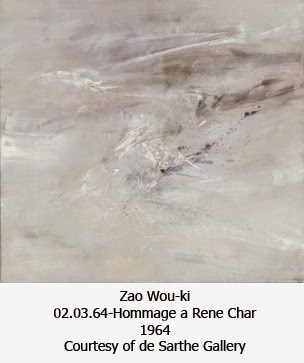 “Everybody is bound by a tradition. I am bound by two.”
Zao Wou-ki

When viewed by Western eyes the paintings of Zao Wou ki are seen as prime examples of Lyrical Abstraction, the primarily French response to America’s Abstract Expressionism, whereas Chinese eyes see a landscape imbued by the most important of traditional Chinese painting’s six canons the “rhythm of Life.”

As The gallery owner, Pascal de Sarthe told the Independent newspaper “His original contribution to modern Chinese culture positioned him as a leading figure of the postwar generation. His paintings were not simply abstract, they expressed thoughts and feelings."

A descendant of the Song Dynasty, it is said that as a child Zao studied Calligraphy for two hours a day. In his teens Zao attended the School of Fine Arts in Hangzhou and upon graduation became one of their drawing teachers. When Zao was 28 he traveled to Paris for further study, the success of the communist revolution in his home country saw it become a permanent move.

Whilst there Zao came under the spell of Swiss artist Paul Klee, about whom he has said "How could I be ignorant of this painter whose knowledge and love of Chinese painting is so obvious? From these small signs drawn on a ground with a multitude of spaces, a dazzling world emerges." Six years later and Zao found his own voice, although initially it was one that avoided his Chinese heritage.

The death of his second wife, Chan May-Kan, saw Zao incorporate his Chinese roots into his work, first as ink paintings and then later in his oil paintings. "As I spread out those stains, life became easier to live and the pleasure of those gestures prevailed on the traces of my memory," he said.

With a given name that translates as “no boundaries,” Zao combines the two aesthetics into his work. But as he told CNN’s Julia Grimes "French thought and Chinese thought are not the same. It's hard to translate between them. Sometimes you must wear yourself out trying to understand. Painting must express these feelings."To which he has wryly added “It was harder than learning English.”

Now commanding prices in the millions when his works come to auction Zao’s reputation as an artist of note is secure even with his straddling of two disparate cultures. As he said in a 1961 interview “I have gradually rediscovered China; it has affirmed itself as my deeper personality. Paradoxically, perhaps, it is to Paris I owe this return to my deepest origins.”

An exhibition of his ink and watercolor paintings will be on show at Hong Kong’s de Sarthe Gallery from the 12th of March to the 11 of April. 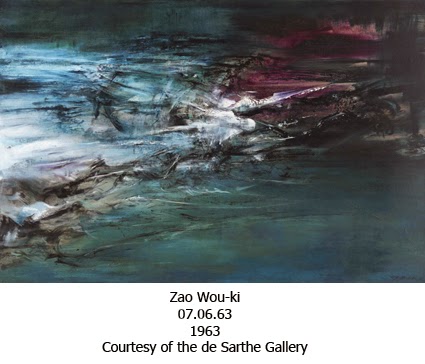