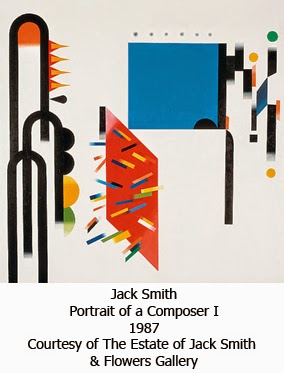 “The closer the painting is to a diagram or graph, the nearer it is to my intentions.”
Jack Smith

Is a person’s appearance a necessary constituent of portraiture or are there are other ways of evoking a human presence? This is the central question that surrounds British geometric abstract artist Jack Smith’s portraits currently on show at London’s National Portrait Gallery. As the gallery’s curator of 20th Century portraits, John Moorhouse, told London’s Telegraph newspaper “This display of Jack Smith’s abstract portraits is a first for the National Portrait Gallery as Smith’s paintings dispense with human appearance entirely.”

Graduating from the Royal College of Art in the early 1950’s Smith was a social realist painter depicting the scenes of his working class background. He was included as a member of the “Kitchen Sink School” that commented upon the drab everyday life of British post war austerity. It was an association Smith rejected saying “This had nothing to do with social comment. If I lived in a palace I would have painted the chandeliers.”

Smith was more involved with the painterly concerns of light, form and pattern. This by the 1960’s had seen him abandon social realism in favor of abstraction. He painted sharply defined objects against a plain background, about which he has said “I like every work to establish a fact in the most precise, economical way.”

For the National Portrait Gallery display Smith’s portraits of composers Harrison Birtwistle and Colin Matthews, who met whilst designing stage settings for Ballet Rambert and the Royal Ballet respectively, have be included. “Their music is who they are, really... So I had to find forms and language that would tell me something about their music,” ArtLyst reports Smith as saying.

Meanwhile the National Portrait Gallery says in its exhibition notes “Portraiture is conventionally thought to be inseparable from the depiction of a sitter’s appearance.  The human face forms the basis of recognition and its expressions convey emotion.  But can portraiture evoke a human presence in other ways? Also, is a human being only a face, or are there other characteristics and areas of human experience that portraiture can address?”

Along with the composers the exhibition includes Smith’s portrait of choreographer Ashley Page and a self portrait. All are on show until the 31st of August. 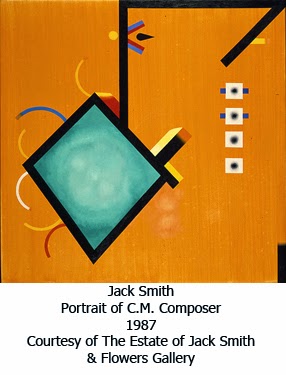