Looking into the Landscape 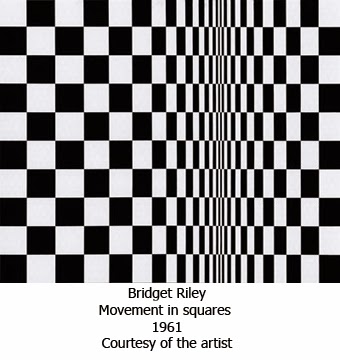 "The more constraints one imposes, the more one frees one's


self of the chains that shackle the spirit."

The British painter and printmaker Bridget Riley used this Stravinsky quote to explain the early days of her journey into abstraction in her 2009 London Review of Books’ essay At the End of My Pencil.

Riley was in her late 20’s and copying the work of the French pointillist artist Georges Seurat to learn how color interacts with its neighbors when she decided to abandon figurative painting. “And then, on a very spectacular summer day looking over a valley near Siena, sparkling and shimmering in the heat, I made my own attempt. I made studies, and later, a painting. I was quite pleased, in fact, with what I'd been able to do, but it had nothing to do with what I had actually experienced in front of this landscape. So I decided to start again to find a new beginning — to start from the themes themselves, that is to say, shapes, lines, and so on. That led to my making a black-and-white painting and seeing what it would do: and it moved," she told the Guardian newspaper’s Charlotte Higgins. "Movement, shimmering, sparkling and reflecting … all those things that happen in landscape," Riley added.

For Riley capturing all that she sees in a landscape, not its narrative, is that which informs her work. As she told the Financial Times Jackie Wullschlager, “I was walking past a hedge yesterday and the shine of a leaf was astonishing, the next leaves were matt, they were lit by light, but they did not reflect the sky.”

Riley learned this way of looking from her mother during the dark days of the Second World War. They were evacuees in Cornwall and her father was missing in action, later to become a prisoner of war. “My mother was an enormous influence, I not only loved her, I liked her, she would and could greet a beautiful day, see it, point it out. This would take her mind off her anxieties, and she in turn would take my mind off, into this world of looking. We were given sight. I knew that somehow I wanted to pursue this looking,” Riley recalled.

And pursue it she did, becoming the queen of the Op Art movement after her inclusion in New York’s Museum of Modern Art’s 1965 exhibition, The Responsive Eye. Riley’s kinetic black and white paintings, whilst questioned by the critics, were a hit with the people and eagerly appropriated into the popular fashions of the day.

It took Riley seven years to incorporate color with her dancing monochrome forms which she achieved by adding grey to her works and eventually substituting it for color. As she wrote in At the End of My Pencil, “At the core of color lies a paradox. It is simultaneously one thing and several things – you can never see color by itself, it is always affected by other colors.”

By tightly controlling the geometric forms of her abstract colored renderings they proved to be as intriguing as the one’s that made her name. For as she maintains “all painting is about [the] relationships of color, shape and line, whether abstract or figurative.”

A retrospective exhibition centered around her printmaking Bridget Riley
Prints 1962 – 2015 is currently on show at London’s Sims/Reed Gallery until the 20th of March. 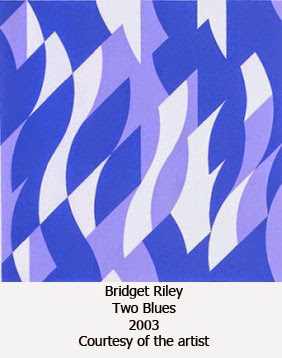