Are the Kids Growing Up? 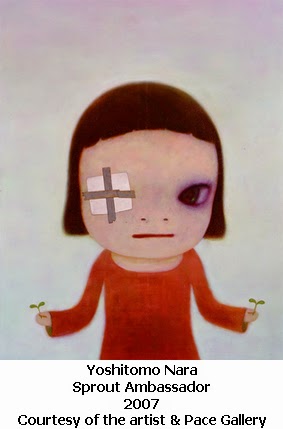 “There’s a part of me that likes testing the audience.”
Yoshitomo Nara

Japan’s 3.11 the Tsunamit, Earthquake and the resultant Fukushima nuclear power plant accident killed over 20,000 people and caused over 300,000 to be evacuated. It was the country’s biggest natural disaster in living memory and its effects have been a deeply traumatic experience for the Japanese people.

Among whom, the Japanese Neo-pop artist Yoshitomo Nara, can be counted. He was unable to work for six months following the disaster. As he told the Asymptote Journal “I became unable to draw. I guess everyone in Japan went through the same kind of emotional experience: I was so depressed that I couldn't help feeling that what I'd been doing was totally meaningless and useless. No one needs art in an extreme situation, after all. People don't think of art unless they are living with a certain mental and physical richness.”

Known for his simply rendered, manga influenced works of coy and sometimes creepy children, Nara grew up as a latch key child in the northern Japanese town of Hirosaki. Surrounded by comics, picture books and album covers, listening to the American Armed Service’s radio, his was a solitary childhood. About which he has said “I was lonely, and music and animals were a comfort. I could communicate better with animals, without words, than communicating verbally with humans.”

Nara found his way back into making art after 3.11 through sculpture. As he told the Japan Times “I couldn’t make pictures on a blank canvas, but I found I could confront a mass of clay. I wouldn’t think about it with my mind. I would just attack it, like in sumo, with my body.”

It took Nara a further five months before he could start painting again and when he did his works became more nuanced and complex. Flat backgrounds became graduated, simple eyes became complex.

In part as a response to 3.11, but Nara also says the changes are a result of the aging process. “My physical power and ability have decayed, of course, but I've obtained new, far-sighted eyes in exchange. Aging does my work good in this sense. I see a big picture, instead of the details I used to focus on with my younger eyes. I enjoy the bird's-eye view of being an older man. And I don't need reading glasses yet!”

His current exhibition Life is Only One is current on show at The Hong Kong Jockey Club until 26th of July. A second exhibition of his work Stars will open on the 13th of March at Kong Kong’s Pace Gallery and run through until the 25th of April. 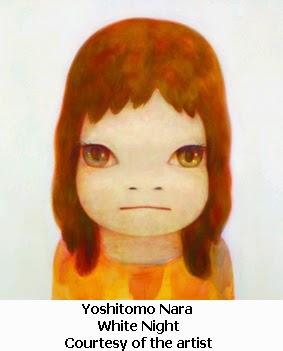