And Today’s Mask Is? 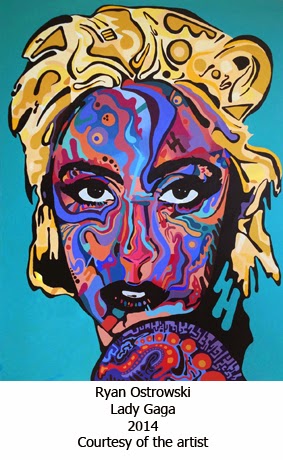 “These aspects of tribal [behavior] are a code of communication, which signal
to others "I am this."  In most cases, we are not.”
Ryan Ostrowski

With Facebook having over a billion active users each month Andy Warhol’s 1968 dictum “In the future, everyone will be world-famous for 15 minutes" seems to have become a fact. If anyone notices is another story, although if you break a social taboo they most certainly will. Just ask Lindsey Stone. A picture of her flipping the bird at the Arlington National Cemetery went viral after a friend posted it on Facebook. Stone lost her job and was ostracized from her community; it took four years for people to forget and for Stone to regain a normal life.

“Contemporary America goes to such lengths to fabricate a specific way to be, advertising is a big culprit here, but it's heavy in celebrity culture too,” American film maker turned self taught painter Ryan Ostrowski told the Art Book Guy.

Ostrowski’s paintings reflect his long held interest as a film maker in facial expression and the masks adopted especially by celebrities to massage that expression to fit a desired message. As the British Art Historian Edward Lucie-Smith wrote in his essay Ryan Ostrowski - What Happened After Pop Art? “Celebrities tend to present a mask to the world, which is in fact a kind of simplified alter ego – not the true self, but nevertheless subtly related to it. The celebrity face, for example as seen hovering above the red carpet at a film premier, is a carefully edited and enhanced presentation of a commercially valuable individuality.”

Masks and their tribal significance is a subject familiar to Ostrowski. “When you grow up in a rural environment and you're gay, there's a kind of mask that you wear; the emphasis is on hiding and concealing these qualities. Converged with that and I think very incidentally and especially once you leave the rural environment like I did and inhabit an urban environment, there's a greater sense of a "tribe" in the gay community. It's always been a huddling around this commonality that we share to, in some way, come to terms with this, and this coming together is very tribal, ” he says.

Using pop icons, which range from Lady Gaga to Van Gogh, Ostrowski overlays their faces with tribal markings that are not all that far removed from the facial tattoos employed by New Zealand’s Maoris. As he has said “As a contemporary artist, tribal insignias not only became a way for me to express unity in the chaos, but on a social level, it's really about bringing awareness to this enormous cultural mask.  I am using Primitivism as a means to describe not tribal, but my own cultural dilemma.”

A dilemma many more of us may have to consider as social media with its celebrity overtones  increasingly integrates itself into our lives. 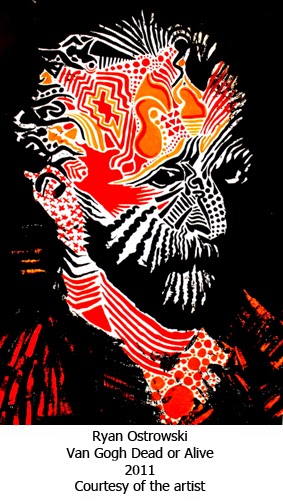