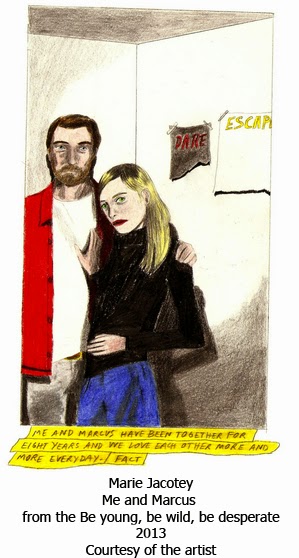 “I want people to identify with the situation and, if possible,
take an offbeat look at the world we all have a part in.”
Marie Jacotey

A few weeks ago I had cause to contact the Italian artist Monica Barengo, unsure of her command of English I sent the email in Google Italian. Her response in part was “your Italian with google translate is fun :)).” Fortunately Monica’s English was much better than Google’s Italian and we proceeded accordingly.

So it is to a degree for the newly minted French artist Marie Jacotey. Currently living and working in London, having recently graduated from the Royal College of Art, English is her second language.

Working in a comic book style, Jacotey sources a lot of the imagery for her imaginative works from the internet. As she told the Are You Realism website “I find internet platforms such as Facebook and Tumblr especially helpful for imagery, as I like observing people, relationships, conversations and an online presence is a huge part of that now. I don't think people realize how funny they can be sometimes, posting pictures of themselves, being so self aware; including myself of course! I don't feel that I am mean, rather cynical sometimes maybe, but my gaze on people tends actually to be quite tender.”

As to be expected with genre she is working in, text is an integral part of her work both interpretatively and as part of her expression. As she explained “English is my second language, when I was working in France all of the text was in French. When I arrived in London I realized how important it was to my drawings for people to understand the text. I sometimes find misspelled words way after I've finished a piece, or an awkward way of structuring a sentence. This used to bother me but now I think it actually adds to the way the images speak. So I decided to embrace any of my mistakes, after all it's how I think in English, and make them becomes part of the humor or the awkwardness of the situation."

As Jacotey navigates her way through the personal and the cultural, the banal and the profound, her observations depict the human condition informed by sound bites, existential angst and the internet. As she has said “I essentially tend to depict women but the point of view I am drawing from isn’t usually clearly gendered, my ‘voice’ can be in turn masculine and in turn feminine. I am by no means trying to give a moral opinion of mine through my pieces but rather wanting to share my observations about human beings and their social interactions.”

Jacotey’s current exhibition Move On! Get Over It! is on show at London’s heike moras art until the 26th of March. 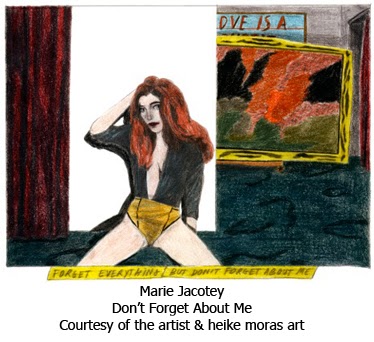