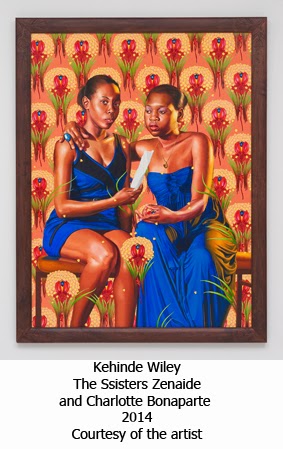 The announcement of the demise of this particular European imperialist demigod in Conrad’s 1899 novella could also be considered a prescient announcement of the upheavals that would engulf the world as people struggled out from under the yoke of European colonialism be they African, Arab or Asian.

It is an influence that informs the work of American artist, Kehinde Wiley to a degree, for he is equally interested in the craft of painting and how that effects a viewer’s perception. As he told Bad at Sports in 2010, “Certainly it’s a question about colonialism, empire, race, and all of that. But let’s bring it back a couple steps. Let’s talk about the artist’s desire to go beyond the pictorial or the representational and the desire to create the abstract—the idea that painting can go beyond what is seen.”
Growing up in South Central Los Angeles his mother was insistent the he attend art school. About which Wiley has said “I was fortunate because my mother was very much focused on getting me, my twin brother, and other siblings out of the hood. On weekends I would go to art classes at a conservatory. After school, we were on lockdown. It was something I hated, obviously, but in the end it was a lifesaver.”

Described as a “brilliant renaissance technician with hip-hop subject matter,” Wiley came to the attention of the art world in his mid 20’s with a series of paintings depicting people from his New York neighborhood. They are dressed in the uniform of the streets in poses they selected from classic European portraiture which Wiley place on a decorative background. As he told the Interview website, “When Ice-T came by, he wanted to be this really great painting of Napoleon by Ingres.”

In his latest series of works, The World Stage, Wiley has broadened his outlook to include people from a wider diaspora than New York.  About which he says, “Many of the reasons why I choose certain sites have to do with a level of curiosity, but it also has to do with their broader, global, political importance- strategically for America, and the world community at large. One of the reasons I chose Brazil, Nigeria, India and China is that these are all the points of anxiety and curiosity and production that are going on in the world that are changing the way we see empire.”

The Brooklyn Museum has scheduled to show Wiley’s exhibition A New Republic from the 20th of February to the 24th of May. 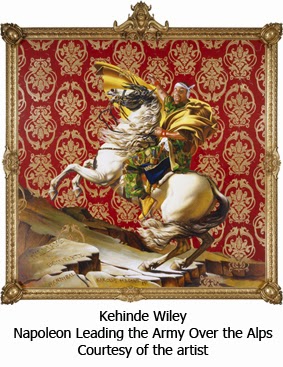