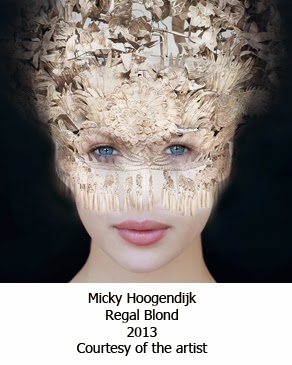 “I discovered the portrait because I had this one lens.”
Micky Hoogendijk

Many years working in front of the camera has given Dutch/American photographer Micky Hoogendijk the empathy necessary to get the emotional content from her models that her portraits demand. As she told The Austin American Statesman’s Michael Barnes “I coax trust, contact and vulnerability from my subjects in order to produce an image from which the viewer can then create his own world.”

Growing up in an artistic environment, her father was photographer/painter and her mother was an interior designer, Hoogendijk married the Dutch artist Rob Scholte in her 20’s and ran the business side of his practice. After they separated she took up modeling and acting. A role in the prime time Dutch soap opera Good times, bad times brought her local fame. About which she has said “I played a bitchy character, five days a week for two years.”

After moving to Hollywood she played a make-up trailer model in Garry Marshall’s 2004 romantic comedy Raising Helen. In 2008 the New York International Independent Film & Video Festival gave Hoogendijk the Best Actress award for her role in the independent drama Blindspot.

Hoogendijk’s switch to the other side of the camera happened the following year. Her mother gave her a professional quality camera and Hoogendijk took to the streets of Austin, Texas. As she has said “I took pictures out on the street. Took pictures of architecture, lines, homeless people. I was able to walk around and be the voyeur. I had been so famous in Holland. This changed my life. Made me a better person.”
After initial encouragement from a local collector which combined with the limitation of only one lens for her camera, Hoogendijk began to utilize her knowledge from in front of the camera to take studio based portraits. “I allow my model’s instinct and personality to melt together with my camera and drive my creative inspiration,” she says. Working with actors “interesting people who don’t mind getting naked,” she elaborates, Hoogendijk explores themes based upon religion, society and mythology.

And as Designer-Vintage.com’s Karin Barnhoorn wrote in 2013, “(it’s) A dynamic and inspiring realm where visual arts, technology and theater melt together into photography. We’re talking Dutch artistic roots here.”

Hoogendijk’s exhibition The Other Side of Fear is Freedom is currently on show at Amsterdam’s Eduard Planting Gallery until the 7th of March.