A Woman Without Secrets – The Art of Louise Bourgeois 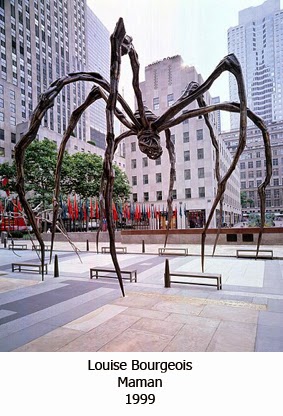 “Louise loved to sit by the window, drawing and writing, watching the street”
Jerry Gorovoy

For the majority of people a spider is an unwanted house guest, although beneficial to the household by trapping harmful insects such as mosquitoes and flies they are more often than not on the wrong end of a broom. It is said that arachnophobia, the morbid fear of spiders, effects up to half of the female population.

The French born American sculptor, Louise Bourgeois was not amongst that number. In fact her best known work, Maman, is a 30 foot (10 meter) high, stainless steel, bronze and marble depiction of a spider that with its six editions graces the courtyards of some of world’s most prestigious museums.

About the many spiders she created, Bourgeois has said “The Spider is an ode to my mother. She was my best friend. Like a spider, my mother was a weaver. My family was in the business of tapestry restoration, and my mother was in charge of the workshop. Like spiders, my mother was very clever. Spiders are friendly presences that eat mosquitoes. We know that mosquitoes spread diseases and are therefore unwanted. So, spiders are helpful and protective, just like my mother.”

During her formative years Bourgeois was a nurse and companion to her mother who became an invalid after contacting influenza during the 1918 pandemic. Bourgeois’ father, during this time, was conducting a long term affair with her English teacher and nanny. Combined with his domineering personality this created an internal conflict that Bourgeois was never able to reconcile. Resulting in a fragility and fierceness combined with a sexual explicitness, if somewhat ambiguous, that became a major influence in her work.

An early feminist, Bourgeois was working in a world where female artists had a second class status and their depiction of sexually orientated work was almost taboo, it took many years for her to gain the artistic reputation she deserved. This was cemented in her early 70’s when the New York’s Museum of Modern Art held a retrospective exhibition of her work.

As her assistant for 30 years Jerry Gorovoy wrote in the Observer Newspaper “Though her work was raw self-expression, it was also her way of understanding herself. It has a timeless dynamic that goes way beyond the visual: a profound capacity to awaken in others a heightened consciousness of what it is to be alive.”

A current exhibition of her work Louise Bourgeois: Suspension is on show at New York’s Cheim & Read Gallery until the 10th of January. 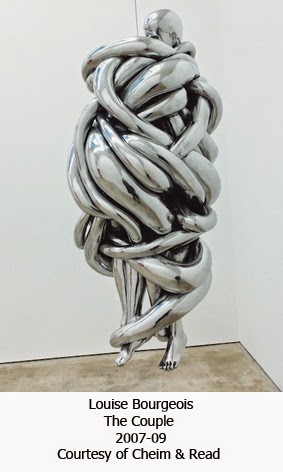