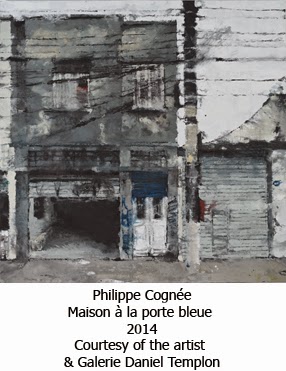 “When a subject is no longer clearly outlined,
spaces for imagination and memory open up.”
Philippe Cognée

Since its invention in the middle of the 19th Century the photograph has become a competitor to and a collaborator with painting. For in essence they are the two sides of the same coin: the visual expression of an idea and other places of interest. And whilst the relatively new kid on the block has yet to reach the gravitas of its older sister in the eyes of some, increasingly artists have incorporated both into their work.

One such artist is Frenchman Philippe Cognée who uses photographs, video stills, and found images from the internet in general and the satellite images from Google’s street views in particular as the basis for his paintings. He renders these views using charcoal, graphite and encaustic (paint mixed with Bee’s wax) which he then heats and crushes with a domestic iron. The result, as the charcoal explodes, the line breaks up and the paint melts is a semi abstract depiction of the scene.

Utilizing subject matter that covers the whole gamut of traditional painting genres from still life’s to landscapes, both urban and rural, from portraiture to copy’s of old maters Cognée explores the role of painting in the 21st Century.

The transitory nature of the digital world, best encapsulated in the 24 hour news cycle or the five to ten minute life of the average twitter message, is investigated in Cognée’s work through his vague renderings that demand the viewer’s input from their memories, real or imagined. The right or wrong of accuracy is abandoned for the momentary now that each member of the audience, prejudices intact, brings to the encounter.

Cognée’s current exhibition Territoires is on show at Brussels’ Galerie Daniel Templon until the 21st of February. 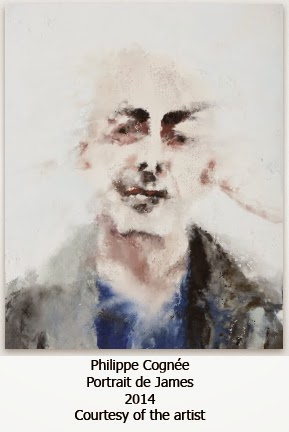